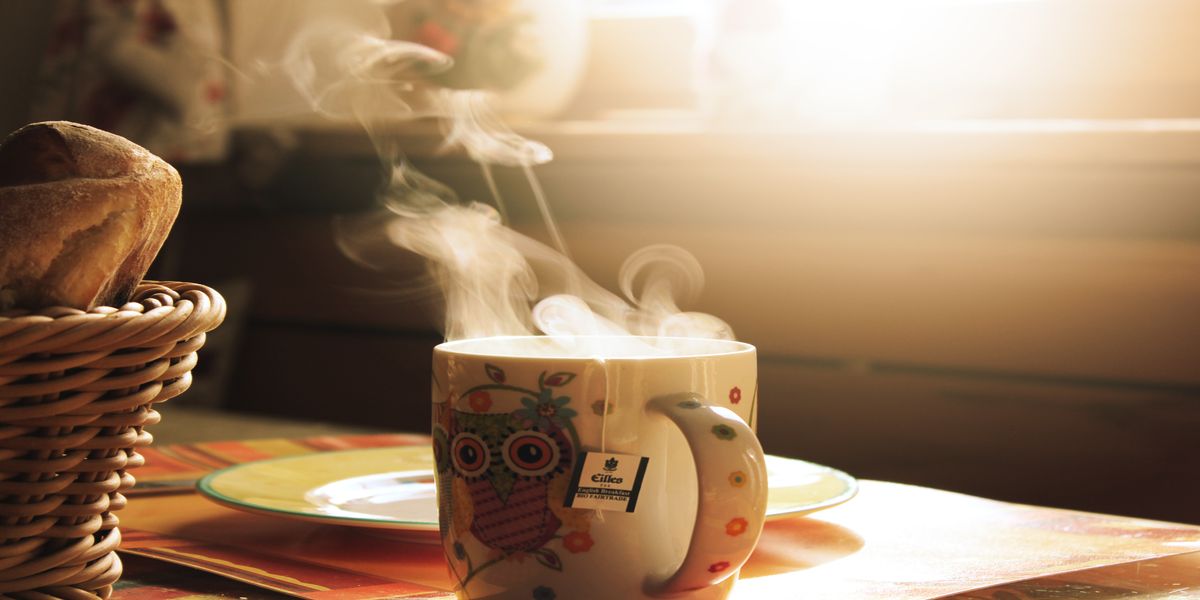 Krista sat, her leg bouncing up and down, and finished her third cup of coffee. She was glaring so hard at the bedroom door she was starting to get a headache. After slamming her empty cup down on the side table, she rubbed her temples and forced herself to relax.

Just as Krista was about to get a fourth cup of coffee, the bedroom door opened. She sucked in a quick breath and held it, suddenly nervous.

A groggy Sandy stumbled out, rubbing her eyes. “Coffee,” she grumbled.

Krista simply pointed to the pot, clearly sitting on the counter and still almost half full.

Sandy grabbed a cup, filled it, and sat at the kitchen table to drink it.

Every time Krista took a breath to speak, Sandy put a finger in the air to cut her off.

As she drank, she slowly perked up until the cup was emptied.

“Not a morning person, huh?” Krista had been leaning on the counter, arms folded and watching. For some reason, seeing Sandy half asleep with morning hair helped her relax.

Sandy stood and stretched, then took her cup back for a refill. “Nope.”

Krista made a face. “Not much for talking either?” If she was going to be staying, she thought they should get to know each other.

“Last night was the first time I’ve been able to relax in weeks. It was nice.” She looked up at the ceiling and around the room. “Your wards are really strong. I have to admit that I didn’t expect that.”

“Oh, um, yeah.” That was all Zenda. She had insisted her house be warded, and even though she hated to admit it, she did feel safer after they’d been set.

“How is it that you were able to do something complicated like that, but you seem like you don’t know what’s going on?” Sandy questioned, sipping her coffee.

Krista bit her lip, not wanting to admit how clueless she was.

“Hey, I get it. We don’t know each other.” Sandy fidgeted, nervous suddenly. “Thank you for letting me stay here. Was it, um, just for last night or…” she mumbled, her eyes lowered.

“No. I mean, it wasn’t just last night. I meant what I said when I told you I wanted to help you,” Krista waited until Sandy met her eyes, “and I’ll be honest, I don’t know a lot of things. But I do know you need help, and I’m the one to give it.” She hadn’t figured out what that would entail yet, though. “So, you’re welcome to stay.”

“Okay, great! And don’t worry, I’m not a psycho killer or anything,” Sandy said with an evil grin.

At Krista’s shocked expression, Sandy burst out laughing and said, “But you need to lighten up.”

“Whatever. If I’m going to help you, I need to know what’s going on.” Krista pinned her with a serious look.

Sandy hesitated. “My kind is rare, and there’s a certain group hunting us down,” she said in a rush. “I thought I was safe, but I wasn’t.”

She let out a long, drawn-out sigh. “Words have power. That’s why I didn’t give you my true name,” Sandy said with an eye roll.

“You—you didn’t even tell me your real name? Are you kidding me? I let you sleep in my house!” Krista yelled.

“You had to know my name wasn’t Sandy. I mean, do I look like a Sandy?”

Krista let out an irritated huff. “Oh, come on, no one looks like their name. Unless your name is Spot, and you’re a dog!”

“Ugh. You’re going to be so much work. I can tell. Are you going to tell me your name or not?” Krista took her coffee to the couch and plopped down. Normally, she wouldn’t have put up with a house guest, but she had a feeling deep in the pit of her stomach that told her to keep the girl close.

“Eventually.” Sandy followed her to the couch and dropped down next to her, kicking her feet over the arm of the couch. “So, what are we doin’ today?”

“Well, we can talk about why you were hiding behind a trashcan.”

Krista rolled her eyes and pushed down the temper threatening to boil over. “How am I supposed to help you if you won’t tell me anything?” she said, keeping her voice low.

“You’re helping me by letting me stay here.”

Sandy laughed and patted her arm. “Calm down. You don’t want to give yourself a stroke.” She huffed out a loud breath and said, “Fine. I’m sure you already know about New Orleans. That’s probably why you moved here. Anyway, it used to be safe here, then something happened. The gifted have been flocking here like crazy. I’m not sure what changed, though.” She sighed and rubbed her forehead. “I got lazy. The wrong person must have recognized what I am, and here we are.”

Krista chewed on her lip. Now she had more questions than she did before Sandy started talking. Just when she finally felt like she was getting caught up, too. And now she was back to feeling lost.

Did she? That would mean admitting she wasn’t the one who’d set the wards and also admitting she had just truly learned how to use her powers. There was no way she’d ever admit that she had gone her whole life up until recently believing she was a witch. She could feel the blush rising up her cheeks just thinking about how foolish she’d been. Ultimately, she decided a little bit of honesty was needed. “You’re right. I don’t know things I should. My parents kept me in the dark my entire life. They refused to talk about their families or where they were from and always told me they’d explain when I was older. They never got the chance, though. So, as you said, here we are.”

Realization dawned on Sandy’s face. “Oh,” she said quietly. “I don’t have any family either. I lost mine when I was young too.” Before Krista could comment, she said, “Don’t look at me like that. I’m not as young as you think. You have to know we don’t age as they do.”

Krista could feel the heat rising over her cheeks again and shook her head. All that money wasted on face creams. “Yeah, it takes some getting used to.”

“What, like you just found out?” At Krista’s glare, she exclaimed, “Oh, my god! You did just find out. How is that even possible?” She laughed.

Krista grabbed a pillow and smacked her in the face with it. “Shove it.”

In an attempt to change the subject, Krista asked, “So where is all your stuff? You didn’t have anything with you last night.”

“I haven’t been able to go back for any of it. And even if I could, I didn’t have anywhere to take it.”

“You can bring it here. Do you want me to go get it for you?”

“Yeah. I said you could stay here. I’m stuck with you until we get whatever this is figured out.” She waved her hands, motioning toward Sandy. “You might as well be comfortable.”

“Thanks. I really mean it. Thank you.” She took her cup back to the kitchen for a refill then returned to the couch. “So how are we going to do this? Can you just pop us to my place?”

“We are seriously going to have to sit down and have a talk. No. I can’t teleport. I was joking. We need to come up with a plan, though. They will be watching my place, so it’s not like we can just drive right up and waltz in.”

“We need a plan,” Krista said, getting serious. “Tell me about the people after you.”