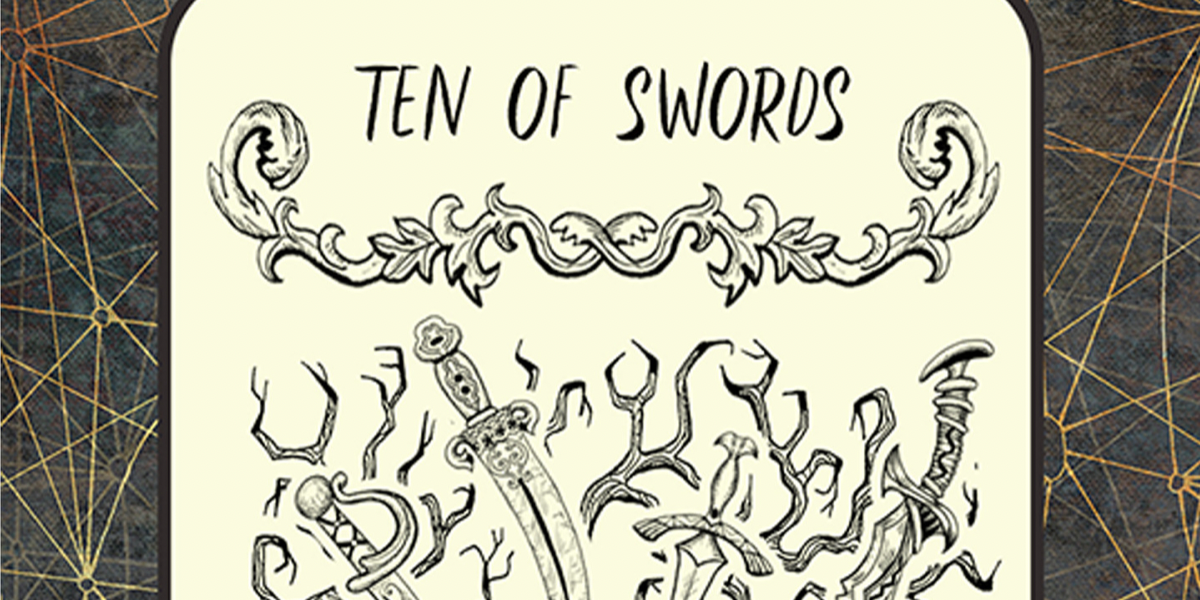 I rub the silver chain along my lip in thought, glaring down at the array of pennies aligned on the table in front of me. What wasn’t I seeing?

Carefully, I move one of the pennies around to the other side. Hoping to see the bigger picture.

My eyes trail along the edges of the coins, trying to see and focus my power, but my brain is too scattered. My mind is too lost.

I slam my fist hard on the small table and the pennies scatter. I immediately apologize to them, picking them up one by one from the ground, murmuring to them.

“Miss Cassandra, let me help you,” a soft voice interrupts, dark hands appearing next to mine, helping me carefully pick up each coin. I notice the burn circle around her wrist after a moment.

“Husband get a bit too kinky?” I ask, carefully putting the pennies back on the table, and gesturing with my chin toward her burn.

Her brows furrow before following my gaze. She pushes her long sleeve over it, and I realize that I should have noticed. How did I miss it?

The humidity was out in force today, so there is only one reason for anyone to be wearing long-sleeves. Something to hide. Or maybe it’s a new extreme weight loss method. I mean, humans were a little too obsessed with their appearance.

“Is there anything else I can get you, Miss Cassandra?” she asks, ignoring my question.

“Can I have another Mardi Gras Latte?” I add sweetly, dragging all the pennies off the table and into her hand. I knew I held on to them for a reason. She blinked in shock at me before leaving to place my order.

I watch her vacantly, trying to focus my scattered brain so I can think. I know that burn, I’ve seen it…somewhere. I rub my temples, my press on nails, each one from a different set, catching in my platinum hair.

My mind should be clearer than this. Usually, after a night of sex, and the warlock put in work, I was in more control. But instead, my sanity is as absent as it’s ever been.

Something’s messing with my vision. It has to be. There’s an infernal blank spot that keeps growing in my mind. Someone is hiding from me.

I lower my head, and by the time I lift it, hours have passed. I blink in surprise to see everyone else in the shop has left, and my server is just clocking out. Might as well. Maybe the origin of the brand is also the source of my blank spot?

She steps inside, and a small bell rings a chorus of Blessed Be that is audible even from across the street.

Let me explain something. I have nothing against witches. In fact, I have friends in both covens in New Orleans and all over the world. Which is how I can tell you immediately this shop does not belong to one of them.

A true witch would never proclaim themselves as a Priestess of Isis. To do so was pretty much saying you were Isis. And even if Isis were real, which she isn’t, at least here she isn’t, you would incur her wrath by claiming such. The dual covens are aware that their magic comes from the Source. Some even know the location of the wellspring.

I watch through the window as my waitress embraces a woman with pale skin and long dark hair who speaks animatedly before pausing. My waitress eventually offers her meager tips before the dark-haired woman makes a grand show of reading tarot cards and escorting her into the back room.

Out of my view.

Here’s the thing about the Source, it calls to us and draws us to it, yeah? And even though most of us remain hidden from mortals, there are those who take advantage.

I’m stepping through the door in the next breath, perusing the crystals stacked on the shelves, all priced exorbitantly. All of them are labeled Blessed by Harmony.

The curtain to the back room parts, and the dark-haired woman stands there. She’s rounder than I thought, her face a bit plumper.

I look at the crystal, touching a rose-quartz absently. “You’re new.”

I glance at her for a moment, looking her up and down analytically. Over the years, I’ve seen my fair share of charlatans who try to take advantage of those in need. New Orleans calls to all sorts, not just those touched by the Source. Sometimes people are desperate for some kind of belonging, and there are those who hope to take advantage of that.

I don’t take too kindly to people being taken advantage of.

“You’re new. To New Orleans.” I say, glancing around the store.

She laughs, and again it grates my mind. “Oh yes, I just moved from Tennessee. I needed a fresh start.”

No talk of being called or summoned.

She’s playing her cards close to her chest. I’m going to have to do the thing I hate doing. I hold my hand out to her. “Cassie.”

Harmony pauses before taking it. “A pleasure.”

Skin-to-skin contact is all I need. Foresight may be what I’m known for, but over the last millennia, I’ve developed the handy ability of hindsight as well. With a single touch, I can see a person’s entire past. It took me a century to get control of the power, and I’d barely left my home during that time.

Harmony’s past flickers through my head, leaving behind impressions and memories. I snarl when I snatch my hand back.

I glare at her. “You’ll be leaving the city.”

She crosses her arms and glares at me, the numerous bangles on her wrists tinkling. “Excuse me?”

My lips purse. “You’ll be leaving New Orleans. We don’t take kindly to those who take advantage of those in need.”

She hisses, and no doubt she has some heartfelt speech prepared for such an occasion. I saw how she used her trauma to emotionally manipulate others in the past. She used it as a weapon to get things her way. If only those who caved to her knew the trauma never happened. A spoiled child who didn’t like sharing attention with others pointed the finger at an older man and claimed he touched her. No one questioned the validity. And Harmony only used this to her advantage as she grew. She saw how easily people caved to her desires, no matter how outlandish, when she threw out this trauma. Even now, she claims to be a priestess to a goddess, and she offers shelter to those who need help. She gets off on being worshipped. Her loyal acolytes, as she calls them, demonstrate their loyalty by marking themselves with fire. She takes their flesh and then their coin. But she doesn’t believe in any of it.

I tilt my head. “Let me explain something to you, Teller of Truths. You are a fraud. You know it and I know it. Normally, if you were fleecing tourists who hoped to exploit our city for something, I would look the other way. But,” I pick up one of the crystals, smashing it against the floor, watching as it shatters, “you take advantage of desperate people. If you don’t leave town in the next week, I will be the least of your worries.”

I smile vacantly at her, letting the white encroach on my eyes, knowing the vision is about to take over. I shoot one look at her, reveling in the terror on her face before strolling out of the store. I barely make it to a courtyard before I start to seize, the vision taking hold.

Fire. I can feel the trace of it against my skin, but it doesn’t burn me. It never does. Fire is comforting, familiar in a way. It has been since I was a child. But now…the Quarter burns around me.

Men in black hoodies and masks hurl lit rags and lighter fluid into buildings. Men and women scream and beg for them to stop, but they don’t. They never do. I move to stop one from shooting an innocent bystander, but the bullet goes through me. Five thousand years, and I still try to interfere during my visions. I look at the Quarter, my brows shooting up when I see the warlock from the other night—month? Year?—trying to douse the flames with his power. A group of werewolves follow the order of their alpha, helping people evacuate before the mob gets to their homes.

A hazy figure across the street glances at me, but I can’t make out his face. He’s tall and lean but has a thrumming sort of power. His shadowy form appears to be glaring at me. I glance over my shoulder, finding nothing. He can’t see me. No one can see me. Can he see me?

He raises his finger, pointing at me, and when his mouth opens, flames engulf me.

I sit up with a jolt, scaring the two EMTs who are riding in the ambulance with me. I tear at the cannula in my nose, glaring at them. “Take me to Tulane Emergency. There’s something there I need to speak to.”

I promptly pass out.