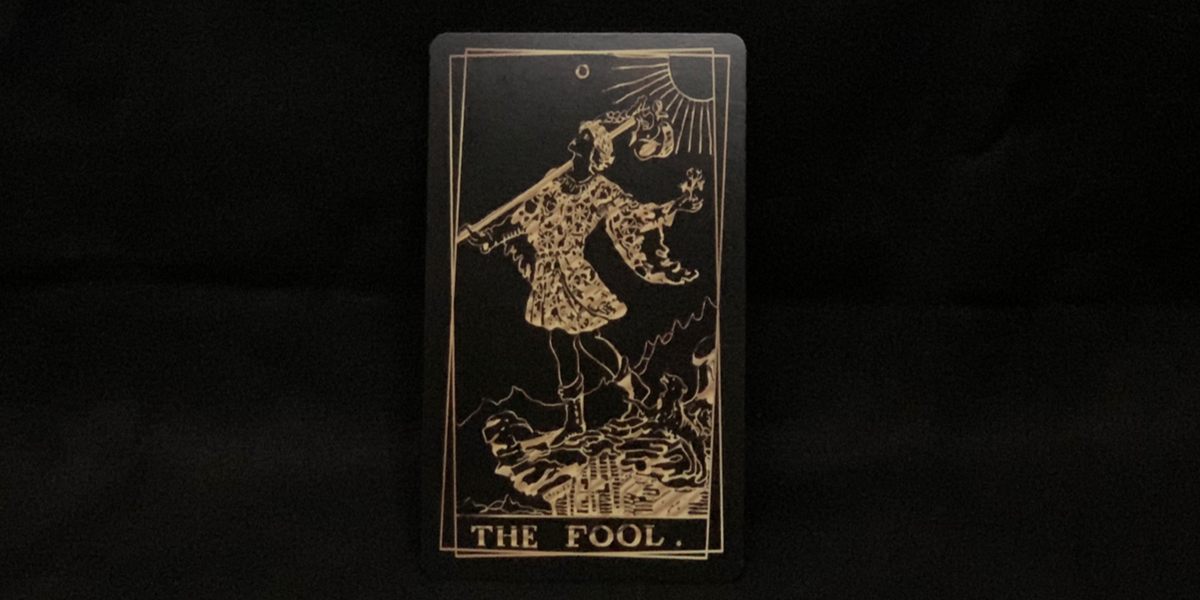 The sound of the cards cracking as I shuffle them is lost in the surroundings of St. Jackson square. Shops are opening, and the slight mist that lingers around the city is lifting as everyone prepares for the day. As if it’s just an ordinary day.

I flip the first card over, looking down at my deck, tracing my fingers along the side of it. Each of these cards holds more for me than just the future. If I wanted to read only the future, I’d look inside my head.

Not that it would help.

Insane in the membrane.

Smiling to myself at my own joke, I trace my finger along the hand-painted cards. Marie gave them to me long ago, when everyone knew of the magick. Before the fracture, when it was sucked clean from the world, like a Texan eating barbecue. The city was spared, though not completely. Magic flickered within the parish walls for two hundred years, regaining its strength. Now, it teeters on the edge of its former glory, awakening and beckoning all who once called it home. The Source, the very soul of magick, is awakening the ley lines which travel out from its heart, and the world of magick is remembering. Soon, the magick that once coursed through the world will return, and those who belong to it will find their way here, to New Orleans. To the Source.

The Fool—For the city, for the source

The Fool dances across the card, teetering on the edge of a cliff. He represents the present, and facing upward, he is the symbol for mania, intoxication, frenzy, fitting for New Orleans.

My fingers linger over the card that lays across the Fool, the challenge that faces the city.

The High Priestess sits on her throne, her crown of knowledge taking up most of her card. She tilts her head at me, smiling. So many of them linger within New Orleans, keeping the truth of the people who call the parish home. Mundane and mystical alike, feel the pull of the Source, the very heart of all magic which beats beneath the city. A future as yet unrevealed.

The card to the left waits. The past for the city.

His lonely lantern is a beacon, warning of concealment, disguise, fear. Fear is what keeps those of us connected to the city on the run, fearful of the future, the hunters that seem to dog our steps constantly.

You just have to, you know, get here.

The next card is the immediate future, the next step in the journey.

My platinum brows shoot up in surprise. Something is coming. The secrets and lies that protect the city from its neighbors are about to be unraveled. The Empress smirks at me, the bounty of the world lying around her throne.

The fifth card sits above the four laid out, and my fingers flip it slowly, the rising sun in the city reflecting off my eighteen different colors of nail polish.

Well, excuse me! I didn’t know it was a crime to be indecisive when it came to nail polish.

The Wheel of Fortune—Destiny, fate, and success.

My card. My tongue taps the edge of one of my teeth as I smile at the wheel. The best outcome I can hope for, that any of us can hope for.

The Below card is next, that which is driving us to this reading. It is the secret that can be hidden even from me.

I hiss out a breath and grit my teeth when I see the horns.

The Devil—Violence, ravage, and rampage.

I’m scared of what can happen to the New Orleans if we are unable to come to terms. The city itself is drenched in the blood of people like me. If we open up again, if the magic returns fully, not just here, but everywhere, will the persecution begin again? Will we run from pikes and the fire again?

Blinking at the Devil card, my eyes glaze. I feel the approaching vision about to take over, forcing me into a full seizure, as my eyes turn completely white. When I was younger, I would have been unable to fight it, but I’m no longer young.

Beating back the oppressing sensation, even as it crawls up my spine, I force myself to flip the seventh card, the card for advice.

Gulping, I trace the star in the sky. It’s telling me to run, to abandon New Orleans.

But I can’t. Outside of the Source, my powers will dim, the future will not as clear. This is the Fracture. The Battle of New Orleans may have raged throughout the city at the time, but the actual fight took place out of sight of the Confederacy. Every person who called the Source home sacrificed themselves. Using the ley lines that led to the city, they sucked all the magic from the rest of the world, preventing New Orleans and our connection to the Source itself from being destroyed.

My hand comes up to wipe away the tear that falls for the friends I lost that day.

Only a handful of us survived.

The cards never told me to leave the city before, not even then. So what in the name of beignets is coming?

The Eighth card should tell me. It’s the influence, the things that are beyond even my sight.

Disaster is coming, something even worse than the Fracture. Another message to run. My mouth dries as I look at the last two cards lying face down.

One symbolizes my hopes and fears for the future, and the other, the outcome for the city.

The sun rises higher, slashing over the cathedral and blinding me. For a moment, the cards in front of me are unreadable. Blinking my eyes repeatedly, they finally adjust, and I look down at the card beneath my hand.

The hopes and fears card.

What the fuck? Flipping it over, it’s only a piece of cut paper, with nothing on it. Blinking at it in shock, I pick up the tenth card, the outcome.

My breath escalates in my chest, and I look down at the rest of my cards, the ones I just read.

My hand touches the side of my head. Were they always blank, and I only thought I saw cards? Or is something blocking my vision of the future? Is it the something that’s barrelling its way toward New Orleans?

Shaking, I stand too fast from my prop up table, knocking over the cards and jar of red vines. They fall to the ground with a loud crash, drawing the attention of the other people lingering around the square.

Muttering to myself, I leave the mess and the cards behind. I need to protect the Source.