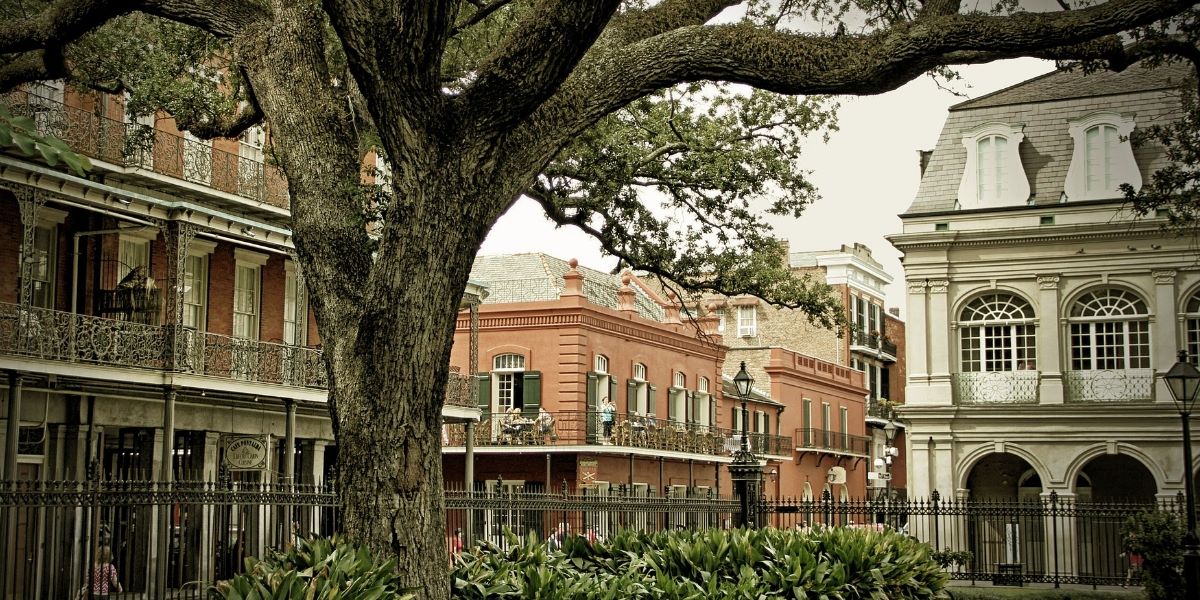 A Girl Without A Tribe

I had been driving for about thirty-three and a half hours straight, only stopping for bathroom breaks and power naps. I had been living on fast food that was easy to eat while driving. The only reason I even bothered with the naps was because I couldn’t afford to get a ticket or die in a crash due to sleep-deprived driving.

But finally, after a full, straight day of driving, my destination was finally in sight. New Orleans. The Big Easy. The Crescent City. NOLA, as it had recently come to be known. Louisiana was really different from Montana. No shit. You’re on the complete opposite end of the country. Snow was still blanketing the mountains in Montana, even with spring on the way. But New Orleans was partly sunny and almost seventy degrees outside, not a fleck of white in sight. I didn’t know how I felt about that. Snow could definitely get old, especially when it was all around us from late September to late April. Some years, the snow would even have an encore performance in June or July. But it was snow, and it was every child’s dream. Kids who grew up in snowless places like New Orleans wished they had my childhood where one of the greatest toys ever made literally just fell from the sky every year.

Find something to enjoy about your new home. My father’s last words echoed in my head. I could still feel his cracked lips on my forehead, where he gave me a farewell kiss. My vision blurred with stinging emotions that threatened to drip down my cheeks.

Keep it together. So that you don’t drive off the road, if for no other reason. I pushed my cheap drug-store aviators onto my forehead so I could wipe my eyes clean of the saltwater. Then, I pulled them back down over my eyes, protecting my sight from the sun that peaked through the intermittent clouds that covered NOLA.

Tired of the white noise of the road running beneath me, I reached over and clicked on the radio of my dad’s old ‘96 pickup. I was greeted with grating static. I spun the dial, searching for anything that was audible and understandable. I skipped the three basketball games and one football game I ran into. Even if I had an interest in sports, I couldn’t understand who was playing, so there was no way I would know who to cheer for. I also skipped the two news stations. There definitely wouldn’t be anything there that would cheer me up. Finally, after switching to FM, I found a jazz station that was blasting music that just screamed New Orleans.

As I drove deeper into the city, it became increasingly difficult to focus on the road rather than on my surroundings. Tourist instincts were fighting to control my focus, wanting me to take in the architecture, flora, fauna, and just general energy of the place. It was so different from the Rocky Mountains and the hunting-cabin-lodge architecture that was way too popular in my northern home.

You can go sightseeing later. First, you gotta get settled. Then, you can look around while you find something to keep you from starving.

The trip to my new shop and apartment was a strange one. At first, I felt like I was traveling forward in time, seeing a future that hadn’t quite reached Fishtail. Oh sure, we had our smartphones and our horrible cable TV shows, same as everyone else. But we also tried to keep life as simple as we could in the twenty-first century. The only people who were more butt-fuck-middle-of-no-where were those of the Amish persuasion who ran their farms far outside of the bigger cities like Billings and Helena.

But NOLA was metropolitan. Palm trees, sky-scrapers, trolleys, and a million other attractions I wouldn’t have even found in Bozeman. Bozeman was Montana’s haven for the Californians who had discovered civilization actually existed outside of Los Angeles and San Francisco. It was enough to culture-shock a person.

As I drew closer to the French quarter, the clock started turning backward rather than speeding forward. The streets became more crowded, and the buildings rarely towered above three stories. Balconies of bright, vibrant colors were overflowing with decorative foliage, keeping a touch of nature in the crowded city. The chain restaurant and corporate shops slowly disappeared until the locally owned businesses dominated the economy.

I knew I had reached the right street when I noticed my surroundings. Everywhere I looked, there were voodoo shops, metaphysical markets, natural health stores, and many yoga studios and psychics of varying types and mediums. I found the tiny stores wedged between a palm-reader and a massage parlor. The windows were boarded, blocking any eyes from peaking in to see the contents, or lack thereof.

Out on the street was an elderly man, showing his age with his attire, wrinkles, and fuzzy gray hair. His lithe form was slightly hunched as he used an intricately carved cane for support. A tweed trilby covered his head, and a beige windbreaker was draped over his arm. His dark hickory skin, wrinkled as it was, didn’t show his age as much as his eyes did. The brown irises had gone pale from a lifetime of hard work.

I pulled into the first available parking space I could find. The moment I stepped out of my truck, I could feel the hug from the city’s humidity. Not sure how much I’m gonna need my full swing jacket here, I thought to myself. But there was no way I could leave it behind. So I stripped off the coat, leaving me in just the grubby t-shirt I reserved for traveling. At least it was more breathable than the coat.

I locked the truck manually and approached the elderly man. “Good afternoon,” I called so as not to shock him too much as I approached. The call made him turn his attention to me, and he looked me up and down, taking me in and evaluating me.

The way his eyebrows first raised, then furrowed, showing I wasn’t what he was expecting. “Namid Cook?”

“That I am,” the elderly man confirmed, still looking at me, confused.

I stuck my hand out, trying to put the gentleman at ease. My future kind of depended on this guy at least liking me enough to say I would be better than no tenant or other tenants. “Yes, sir. It’s nice to meet you.”

“Mm,” was all Mr. Broussard said as he wearily took my hand. The handshake showed that as old as the man was, he took good care of himself. He gripped my hand tightly, matching my youthful strength. It was a warning. “You’re not from around here, are you, chère?”

I released a little laugh. “Am I that obvious?” Of course, I am. Nothing about me says that I’ve been in New Orleans longer than twenty-four hours.

“Just a bit,” Mr. Broussard said sarcastically. “You said you’re starting a business here? That’s why you want to rent the properties?”

Mr. Broussard looked me up and down for the third time since he first laid eyes on me. “You’re awfully young to be an entrepreneur.”

I laughed again. “So I’ve been told?”

“And what sort of business do you want to open up here?” He’s probing me because he’s suspicious.

“I was planning on opening a holistic store.”

Mr. Broussard rolled his eyes. “Yes, that’s the thing that New Orleans is missing.” Despite this man’s distrustfulness and sarcasm, I couldn’t help but like him. He may be a cranky old bastard, but at least he’s honest. Honesty was depressingly rare in this world. “You sure you got the money to afford this place, chère? Commercial property is expensive, especially in this area of town.”

I reached into my pocket and pulled out the crumpled envelope my father gave me when he saw me off almost two days ago. I handed the envelope to Mr. Broussard. “That should be enough to cover the first month of rent for both areas and the security deposits.”

With a quirked, bushy brow, Mr. Broussard opened the thick envelope and peaked in. If he had dentures, they nearly fell out when he saw almost five thousand dollars’ worth of hundred-dollar bills. Once he’d gotten over the initial shock at the sight of the money, the suspicious look he’d worn on his face the entire time returned with twice the amount of scrutiny in his eyes.

“I didn’t steal it if that’s what you’re thinking. It was a gift from my father.” Thanks, Dad. I know you wanted me to use this money to go to college, and I can’t imagine how difficult it was for you to hand it over to me for this. “If you don’t believe me, his number is on the envelope. You can call him and check with him.”

Mr. Boussard’s glare didn’t ease up once during the long seconds he took to read me. Then he reached into his trouser pocket, pulling out a prepaid flip phone. Probably the cheapest, most user-friendly cell phone he could find. Mr. Broussard kept looking between the number written on my envelope and the keypad for his phone as he typed out the number.

Mr. Boussard didn’t bother to step out of earshot as he put his phone up to his ear. “Hello? Is this Mr. Cook? Mr. Cook, my name is Mr. Broussard. I’m the landlord of a property that your daughter, Namid, has shown interest in… Yes, I just wanted to call and make sure that the funds she gave me for the rent and security deposits came from you as she says they did… They did…” Using his shoulder to hold his phone to his ear, Mr. Broussard pulled a bill out of the envelope and held it up to the sunlight. They’re not counterfeit. Mr. Broussard came to that same conclusion after taking a moment to look at the bill. “Yes… Thank you for understanding. I hope you and her take no offense, but I can’t be too careful these days… Thank you, sir. You have a nice day. Bye-bye.”

Mr. Broussard snapped his phone closed and slipped it back into his pocket before taking out a keyring. For a landlord, the keyring was almost barren. It had one car key with a matching fob and three property keys. Mr. Broussard slipped two of the property keys off of the ring and offered them to me. “Welcome to NOLA, Miss Cook.”