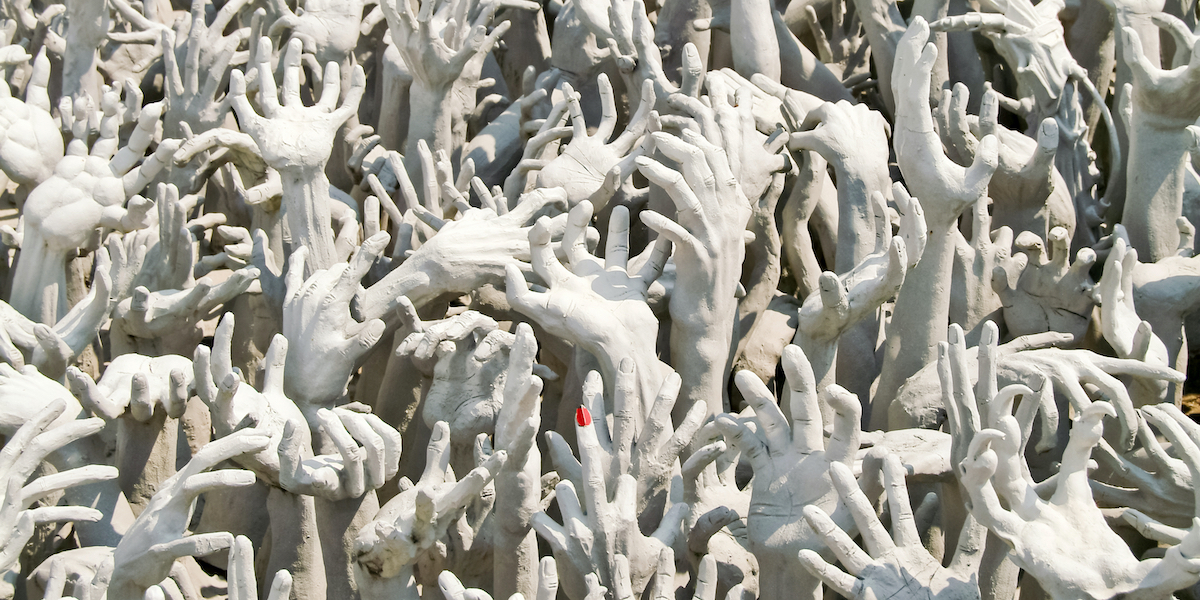 The One Who Got Away

Not many escape from a contract once it has been made with my kind. Sure, there have been theories and ideas on how to escape from a contract, and we duly throw out misdirection to keep you guessing. In nineteen-eighty, I found out one of the ways someone can escape us and paid the consequences of my failure.

This failure would leave me to recruit human familiars, ones not quite ready to give up their souls for a deal. Now I can hear what you are saying. “Doc, how does someone willingly serve a demon?” Simple. They didn’t know they were doing it. I would use a method of hypnotism that I learned from vampires during my earthly life. I would often use it on my patient, too. They’d be deep in my thrall and never know it. Pretty clever, huh? But I am getting ahead of myself.

Antoine Delacroix, a member of the Republican party, not an esteemed member, was just some minor pencil pusher. He sold me his soul for the election of one washed-up Hollywood actor, a Ronald Reagan. Yes, win one for the Gipper, that Ronald Reagan, who managed to become Governor of California. California, they let anybody in.

I used my infernal powers to sway the election in his favor. To tell you honestly, I wasn’t even sure it was possible, but even I was impressed with the results. He won in a landslide with four hundred eighty-nine electoral votes. I have often wondered if others had sold their souls and the combined abilities were the factor, but the world may never know. All I know is I had a hand in it.

The deal was until the election was over, and of course, you know he ran. But they always run, don’t they? I had drawn three souls to assist me. With my two trusty hellhounds at my side, I was feeling mighty confident, but pride goeth before the fall, as my mama did say. It was a lesson I was about to learn.

He had crashed that garish red IROC Z into a lamp post to avoid hitting Mr. Swinton. He could have plowed into him, not that he would feel it, but instincts told him to swerve. Just as Mrs. Damas rose out of the ground, he kicked the driver’s side door open. He let out a startled scream at her sudden appearance. That brought a chuckle and a smile to my face. As she seized his leg and dragged him out of the vehicle, she clawed and scratched violently at his exposed skin, leaving long bloody gashes in his forearms and cheeks.

He landed hard on his back, letting out a short exhale as she continued her assault on him. He swatted and kicked at her to no avail as Mr. Swinton moved around from the front of the car with slow, lumbering steps. Now, where was Mr. Fredickson in all this, my third summoned soul?

Antoine let out cries of pain as Mrs. Dumas’s nails continued to dig into his skin, then Mr. Swinton pushed the now hissing Mrs. Dumas off of him. Mr. Swinton grabbed him by the collar of his polo, lifted him up, and slammed him into his car. Antoine let out another short exhale, then small panting breaths. Mr. Swinton looked over his shoulder at me for instruction.

I stood, trying to look enigmatic and in deep contemplation while my hounds waited on either side of me, growling low in their throats. But where is Mr. Fredrickson? This is aggravating. I’d never had a soul summoned wander before. He appeared suddenly from behind the car, swaying on his feet like a drunkard. I growled in aggravation and summoned him back to his card. He was completely useless, and I reminded myself never to summon him again. I took a deep breath and exhaled slowly. Antoine trembled in Mr. Swinton’s grip while Mrs. Dumas snarled and bared her teeth at him. Mr. Swinton joined in this behavior as Antoine closed his eyes and began to weep.

I savored every moment as if I were taking in a fine-aged scotch. I doffed my hat to him, making a big theatrical show. I slowly approached, accompanied by my hounds, and why not? He was trapped and not going anywhere. I had all the time in the world at that moment.

“You said until the end of the election,” I began, waggling his blank card back and forth. “The election is over, sir. Now the tally comes due. Fun is fun, and done is done.”

My two remaining assistants grew silent in my presence. Antoine was hyperventilating in Mr. Swinton’s grasp. Tears streamed down his cheeks. He had yet to open his eyes or respond. I reached out and delicately, with my fingertip, wiped a tear from his cheek. He winced and pulled back at my touch, his breathing growing more erratic. I put my finger in my mouth, drinking that tear, and it was pure ambrosia, so good. It was like eating a fine piece of dark chocolate. I wanted more, but I refrained. Self-control was very important. Antoine finally opened his eyes and looked at me.

“There you are! Mr. Swinton, will you kindly let him go,” I said as sweet as I could.

He let Antoine go and stepped back as I moved to take his place. My hounds flanked him, emitting their low menacing growl while my minions stood at my back. He was trapped, or so I thought. What I didn’t realize was that we were right on the border of Metairie, the sterile lands, the wastelands. The place where my kind could not go and had no power. I should have been paying more attention. I cursed myself every day for my lack of attention.

He took a look behind him. I believed it to be like so many before him, that last glimmer of hope. What if I try it one more time, or if I am faster this time? I will get away. I never deprived my contracts of this notion. Hell, I had even entertained that notion and given them the false hope of escape. That was exactly what I chose to do, and at that moment was where I fucked up.

“Do you think you can make it?” I asked.

“You speak! The mute has been cured. Praise the Lord! You know there was a time we let the dogs loose to chase a rabbit for sport and for gambling purposes. If them dogs caught that rabbit, they tore it apart, so let us call you the rabbit, boy! Run rabbit run!” I said.

I stepped back, and he bolted for it. I whistled, and my hounds pursued. Then I saw it. The line was bright and white, sticking out like a sore thumb. Why didn’t I see it before? I’d been too prideful in my abilities. I cursed myself and let out another whistle to reign my dogs in.

To my horror, I watched as Antoine tripped and fell over the line into the sterile lands. I marched down there, feeling the fury and rage fill me with every step. My body grew hotter and hotter until I burned with it. He would not get away from me. No one ever got away from me! He sat on the ground panting, staring at me as I reached out for him. He didn’t move. Either he was exhausted or realized subconsciously he was safe.

My hand crossed the line and vanished, ceasing to exist. I pulled it back, and it returned. In anger, I reached through again with the same result. I bared my teeth at the unmoving human and let out a cry of rage. He watched with fascination at my furious frustration. My assistants ran full tilt into and past the line, vanishing entirely. I felt them return to their cards in my desk. I threw back my head and let loose another scream. I howled with rage as my human form slipped, showing the demon underneath.

At this, Antoine scooted away but not too far. He was frozen by what was going on before him, and why shouldn’t he be? It wasn’t often mere humans saw beyond the veil. I clutched his blank card and bared my teeth at him while my hounds whimpered. The card burst into flames in my hand before turning to ash. Now my breath was coming out in short pants as I tried to get my temper under control.

My chains tightened, and I assumed it was back to the corner for me. I glared at the unmoving Antoine Delacroix, hatred burning in my chest and eyes blazing at him. I heard it then. The screaming was very faint to begin with, and it grew louder as if several thousand voices were screaming. I was frozen to the spot. Not only was I held by the chains, but by the terror that filled me with the recognition of that sound.

Panic filled my guts with a hot lead that coursed through my veins, breaking my body out in gooseflesh and a cold sweat. That cacophony in my ears was the damned screaming in Hell. The ground beneath me began to shake and crack. Red hot firelight rose from these cracks, and the voice that was once in my ears became audible. Antoine watched on in wide-eyed wonder and fear. He was frozen to his spot, too, it would seem.

The ground beneath me began to smoke and soften as it melted from the heat. The screams and cries of the damned filled the air then the first hands broke through the ground. The skin was ashen gray with black char spots, and they grabbed eagerly, taking hold of my ankles. The gray arms were next, grabbing my wrists and chains.

The screams were deafening as more and more arms and hands emerged, grabbing my body in their vice-like grip. The ground beneath me was nothing but red Hell flames. My screams joined theirs, and they began to pull me downward, back to Hell for my failure.

The last thing I saw was Antoine Delacroix pissing himself and passing out. Two things would happen to him. First, he would die with a rosary in his hand. Second, he would have nightmares of that for the rest of his life, resulting in him sleeping with the lights on and checking under the bed for a Hell portal.

Meanwhile, I descend, tumbling into the long darkness that leads into Hell surrounded by those screaming voices.