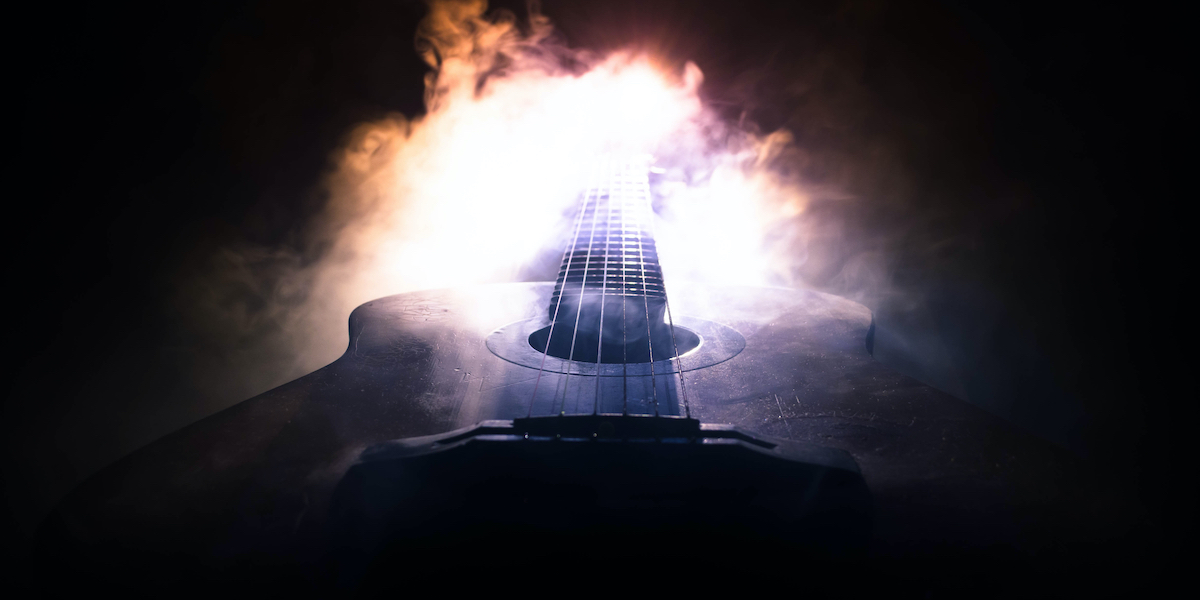 What is the first thing you think of when I say Robert Johnson? Blues icon or legend? Yes. Dead at twenty-seven, although he still had four more years on his contract. Founder of the twenty-seven club, as they call it? Yes. Guitar player? Yes. Sold his soul at the crossroads to the devil? Yes, and we know this devil oh so well. It was me. Let me tell you all about it.

It was nineteen thirty-one, and the cool spring air was laced with the scents of jasmine and oleander as my feet touched the ground, and I took form once again to conduct the nightly deeds. To my amazement, it is not a needy, greedy human that had summoned me tonight but one of my own kind.

I stared into the fat, balding, bespectacled face of one Roland Hildabranch of Rochester, New York. He was what you would probably call a middle-management demon, a go-between from the infernal powers below to us working in the earthly realms above. In life, he was a factory owner who set his factory on fire with employees in it for the insurance money. All those men, women, and children burned alive and got him a one-way ticket to the hot place. He offered me a curt nod and a small smile. I tipped my hat to him in response.

“Good evening, John. We are legion,” Roland said, looking at the clipboard in his pudgy hand.

“Roland. And to what do I owe the auspicious honor of your presence here this evening?” I asked.

“Umm,” he began while removing a handkerchief and dabbing his forehead, “I have a very special assignment for you. We are sending you to Mississippi to handle a transaction.”

“Mississippi!? You want to send me out to the sticks? Don’t they got their own crossroads demons out there? I am sure they can handle it, whatever it is,” I protested.

“It’s a special case which requires a finesse that they don’t have out there in Mississippi,” Roland said.

“Yeah, he’s black and wants to be a musician. He’s been ridiculed, so he wants to show them up,” Roland said.

Show them up? Well, how could I refuse? Could I refuse? I wasn’t sure that I could? I stood there weighing my options, the pros and cons of the situation presented before me. I scratched my cheek as he nervously dabbed at his bald pate with that handkerchief. I really didn’t want to go to Mississippi. It was a third world as far as I was concerned, completely uncivilized. Roland began to flip through the papers on his clipboard.

“He is going to be big,” Roland said.

“How big we talking about?” I asked.

“He is going to influence the music world for decades to come!” Roland exclaimed.

“Wonderful, we are legion,” Roland said.

“We are legion,” I replied.

Joke was on me because he wouldn’t get that notoriety until the nineteen sixties. But he was a big fish in a little pond, and I mean little pond. I jumped at the chance to collect the contract. My chains lifted me up as I became incorporeal again. I sailed across the night sky toward this someday famous musician.

The crossroads I was drawn to was in the middle of a dirt road. Left of me was an open field as far as the eye could see. To my right, small wooded areas with patches of clearing. Telephone poles lined the right side of the street. The moon in the night sky was huge and full, providing the only light. Roughly half a mile down the road was a cemetery. I could smell the cemetery dirt from above.

There was a young man in a suit, a fedora, and a guitar strapped on his back. He was passing back and forth in the center of the crossroad. He stopped and stomped his feet as he clenched his fists, shaking them at the sky. He was cussing, and I could smell the salt from the hot tears that were running down his cheeks. I waited until his back was turned to set myself down on the ground.

Small rocks crunched under my shoes as they took form. He froze and very slowly turned to face me. I doffed my hat to the young man and inclined my head slightly. He stood in wide-eyed awe of my presence. I placed my hat back on my head and waited for the young man to compose himself. He approached me with his hand extended. He touched my shoulder to make sure I was solid and, at that moment, I was. He tapped my shoulder a couple of times before breaking out into a laugh.

He clapped his hands together in a prayerful manner and looked to the heavens, thanking them for my arrival. He was thanking the wrong place. I remained silent, enigmatic, and smiling. Sometimes the shock of this actually worked took a while to wear off. The crickets chirped in the grass, and the wind brought the sound of music from somewhere near that cemetery I could smell.

The young man heard the music too and turned his head in that direction with a scowl. It was a look of pure, unadulterated rage. I could taste the emotion in my mouth like a fine whiskey, and once swallowed, it burned pleasantly in my chest. He clenched his fists so hard at the sound that his nails dug into his flesh. I smelled the copper of the blood droplets as they escaped from between his fingers. They fell to the ground to be swallowed by the hungry earth. He turned his attention to me, and now was the right moment to make my introductions.

“Don’t like their fancy playing? Want to be there with them doing what they do? I am Doctor John Layafette, and you have summoned me, Robert, to this charming rustic location. I am at your complete service,” I said, once again doffing my hat and adding a formal bow for dramatic flair.

“Yea, yea, I want to be there with them. They tell me to stop playing. Knock that noise off, Robert. Get out of here, boy, and give us all a break. A break! I will show you all a break!” he said.

He directed the last part of his diatribe toward the music that was being carried on the wind. He stared in that direction, seething with rage. I could feel the vibrations coming off of him, and it felt like a good massage.

“That’s right, fuck that Son House. What does that old man know about music, anyway? Why aren’t you, the up and coming, down there on stage? Should he know it is time to move on to something new?” I said.

Robert spun on his heels, his eyes livid. They were full of blind, reckless ambition. It was all too perfect. I could feel the smile on my face widen.

“They called my playing noise! Noise! Robert, stick with the mouth origin like you’re good at! I can be good at the guitar! I can be! They ain’t given me a chance!” Robert bellowed.

“Now, now, simmer down, young man. I like you. You got that fire in your blood. You can be a fine minstrel. I can see how music can take a man like you out of here and out of this squaller,” I said softly.

“Yeah, like it did for Son House,” Robert agreed.

“Just like him. See the world. Be loved by blacks and whites alike. Money, booze, women, riches, and fame,” I said.

“Women and booze, yea, I like that. I want that. I want it all. I want to be rich like these white folk, no more bowing and scraping. They are going to have to bow and scrape to me,” Robert said solemnly.

“Sure enough. Say, why don’t you play that guitar for me? Let me hear your sweet sounds,” I said.

His eyes lit up, and a wide smile broke out on his face as he swung the guitar around to his front. He began to pluck and strum on it. Sure enough, it was the worst noise I had heard in a long time. I didn’t think I’d heard such horrible noise since I was in Hell. I forced myself to be pleasant. I nodded along and tapped my foot. Hell, I even applauded at the end of his performance. He smiled proudly and bowed his head in thanks to my applause. I held my hands out for the guitar, and he took it off, carefully handing it over.

I strummed it, I tuned it, and I played a small ditty on it. Robert’s eyes lit up in sheer pleasure, and he bopped his head along with the song I played. Then I handed it back to him, and he eagerly took it. I reached into my suit coat and removed a blank tarot card. Robert studied it, and understanding filled his eyes. He looked at his palms, covered in dry blood, and back at me.

I nodded and said, “That’s right, we want your blood.”

Robert dug his thumbnail in and reopened a cut, and blood started to run out. I extended the blank card, and he moved his hand over it, allowing the blood to drip on it.

“The deed is done,” I said, putting the card back into the inside pocket of my suit coat.

“Thank you,” Robert said and started toward the farm.

“No, no, no,” I said, and he turned and looked at me. “I say give them a mystery. Disappear for a bit, let them wonder, and then come back to show them.”

He laughed and pointed at me, then to his temple, and then back at me. I laughed and offered him a smirk, along with a head nod. He moved past me in the opposite direction.

“I like the way you think, Doc,” he said with a wave, and then he disappeared into the night.

My chains lifted me into the night air and took me back to New Orleans.

Robert died in nineteen thirty-eight, poisoned by a jealous husband of the wife he was having an affair with. I felt his card burn in my pocket that day and removed it as the new image formed on it.

It was Robert wearing the same clothes he had worn the night I had met him. Only his face had been replaced by a skeleton’s. He was clutching his guitar by the neck, and next to him was a bottle with booze spilling out. The legend read The Dead King of the Delta Blues.