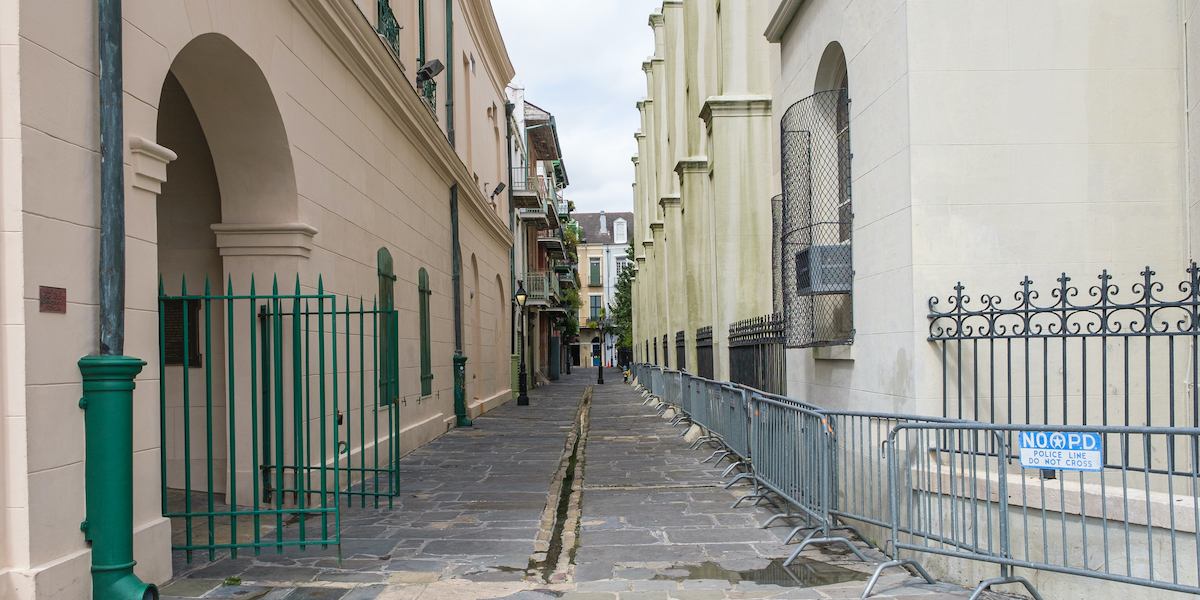 The Last Rites of Ramone Alvarez

It’s an ethical question, perhaps some sort of moral quandary, if you will. Take the case of Ramone Alvarez, who asked me for the confidence to speak to the ladies and then developed a taste for rape. Quite unsavory, really. Now, was he always gonna commit them rapes with or without me? Was he always meant to be hellbound? If you are a Calvinist, you call that divine providence. But maybe that’s one of those questions that keeps you up at night, staring at the ceiling as you wonder.

“Let me ‘splain to you!” Ramone yells at me as he darts down Pirate’s alley near St. Louis Cathedral.

I stand at the entryway of the famed alley, my hounds on either side of me. Ramone trips and falls in front of the Faulkner house, which is fittingly a bookstore these days. I whistle, and my hounds bound after him as he scrambles to get up.

They are on top of him in no time flat. One seizes his lower calf in its mouth and sinks its teeth in, breaking and digging into the skin. Ramone howls in pain as blood gushes. The hound drags him back toward me. Ramone screams, clawing at the stone ground, and kicks my hound in the face.

The hound cries out in anguish and lets him go. Ramone yelps, springs to his feet, and begins to limp down the alley. Why the hell did my hound let go? That shit should not have happened! Then I see it reflected in the lamplight, a silver cross in the sole of his shoe. Ain’t that sacrilege or something?

“Because, you dumb Spaniard, there ain’t nothin’ to explain! I didn’t force my dick into the women,” I call back.

He comes to the intersection of Cabilod Avenue and Royal Street. He stands there, looking left and right, unsure which direction he should go. To those who have never been to our fair city, you can only go left down Cabilod. So he goes straight toward Royal Street.

My hounds growl low in the back of their throats, and I find myself growling with them. I whistle sharply, and they pursue him, running up along the wall, leaving holes where their nails dig in for purchase. One goes through a picture window of a business on the corner of Royal, an Alex Beard Drawing and Painting. It leaves a large jagged piece of glass sticking up from the bottom of the window frame. Do pay attention to that piece. It will come into play later in our story. The hound smashes its way out the front window and cuts Ramone off before he can get down the street.

Ramone puts his hands up as the hounds drive him back toward the cathedral and me. They bare their teeth at him, their eyes full of hellfire and fury. Ramone limps, blood pouring from his leg wound, leaving a trail on the ground.

One of my boys snaps his large teeth at him and barks. He lets out a high-pitched scream, like a woman in distress. He begins to cry and pray, calling out the name of the holy father, the holy son, the holy ghost. No one answers, of course. If they exist, they ain’t listening to him. It strikes me as funny, sure enough, it does, and I begin to laugh.

“Who do you think you’re talking to?” I inquire.

“To the Lord! To save my soul!” Ramone cries between sobs.

“Do you honestly believe after what you did to them girls and the contract you made with me that anyone up there would listen to such a pathetic, miserable little shit such as you?” I ask.

“I will repent!” he screams.

“Ain’t no repentance!” I yell.

The hounds, sensing my mood, snarl and growl as they close in, flanking him on either side with their massive bodies. They won’t move in until I give the word, but long strains of drool escape from the sides of their muzzles.

I can feel his fear. I can see the sweat glisten off his skin in the lamplight. I can see his body tremble and quake, his heart jack-hammering in his chest as panic grips him. His stomach making loud growling noises as his fear sends it spiraling out of control. His eyes are full of dread, and they move in every direction, trying to find any means of escape. His mind is racing a million miles a minute, trying to calculate scenarios where he escapes, lives to fight and rape another day. It is a banquet, and I am savoring every morsel. And those muttered prayers under his breath to a heaven that ain’t listening is desert. Scrumptious!

Now I know what you are thinking, Doc, why didn’t you call any souls to help you? Well, children, I underestimated him. When he came to me, he was scrawny, greasy, and covered in acne. How times have changed.

He turns slowly to face me as the hounds circle him. I tsk, tsk, tsk, and waggle my finger back and forth.

“I loved them,” he whispers.

“Mmm, weren’t some of them twelve or fourteen?” I ask.

“I was their lover! Their teacher!” he roars.

It wasn’t uncommon for a girl of fourteen or sixteen to be wed during my human life, but these are not my times anymore. Times have changed, views have changed, I have seen them through the years. All I can think about as I look at his greasy ass is my dear sweet daughter Christine. She was twelve when she left this world and had a man such as Ramone had the audacity to put his hands on her…well, they would never have found the body on the large plantation my family once owned.

“Age is just…just a number, and some of them only cried a little,” he said weakly.

I scoff at his attempt to justify his actions. Hadn’t I attempted to justify my actions when I was alive? I honestly think all the hellbound souls do it. It’s how they sleep at night without being plagued by nightmares. It’s how they quell their consciences. What they don’t know and what they find out, as I did, is that they killed that fucking cricket. They only imagine it’s still there on their shoulder, whispering in their ear.

I whistle, and my dogs move in for the kill. Ramone moves at the exact right moment, sliding backward out of the way. My boys knock their heads together, and each lets out a whimper. He limp runs down the alley back toward Royal, giving himself his own version of the last rites.

“May the Lord in his love and mercy help me with the grace of the Holy Spirit. May the Lord who frees me of sins save me and raise me up again,” Ramone whimpers through pants for breath.

“Get up! And get after him!” I yell at my dogs, my human visage almost slipping.

Ramone stops at the corner of the alley and Royal, staring intently at that jagged shard of glass I told you to pay attention to. He looks at the hounds bounding toward him and me on their tail. He licks his lips and blesses himself. In one hundred and thirty-seven years of demonic existence, I think I have seen it all, and then some little fucker like Ramone Alvarez comes along and dispels me of that belief.

He points at us and screams, “No one takes my life but me!”

He throws himself upon the piece of glass. It goes right through his adam’s apple, through his spine, and out the other side. I reach him, and I look at him as rage begins to fill me with my own brand of hellfire. His wide-eyed, open-mouthed expression is akin to a fish out of water. His blood runs down both sides of the glass and pools both inside and outside the shop window.

“Son of a bitch! Son of a goddamn bitch!” I scream.

I kick the deadman’s knees. My hounds back away, cowering from me as I let loose an unnatural scream into the night air. Anyone in the general vicinity who hears it will most definitely have nightmares this evening. His card burns inside my coat pocket, and I pull it out. I hold it in the palm of my hand facing him, and I slap my other hand down on it.

The image and legend appear. There is Ramone, face up in a spread eagle position. He is naked with huge shards of glass sticking out of him. Around him, in a two-row semicircle, are gray-skinned women in white shifts. Each one bears the face of one of his victims. All of them smile, showing off razor-sharp cannibalistic teeth. Their eyes light with malicious glee. Each one of them holds a jagged piece of glass. The legend on the card reads: The Late Rites of Ramone Alvarez. This was most satisfying! Most satisfying, indeed. A dark smile curves my lips as my chains pull me back to my corner.