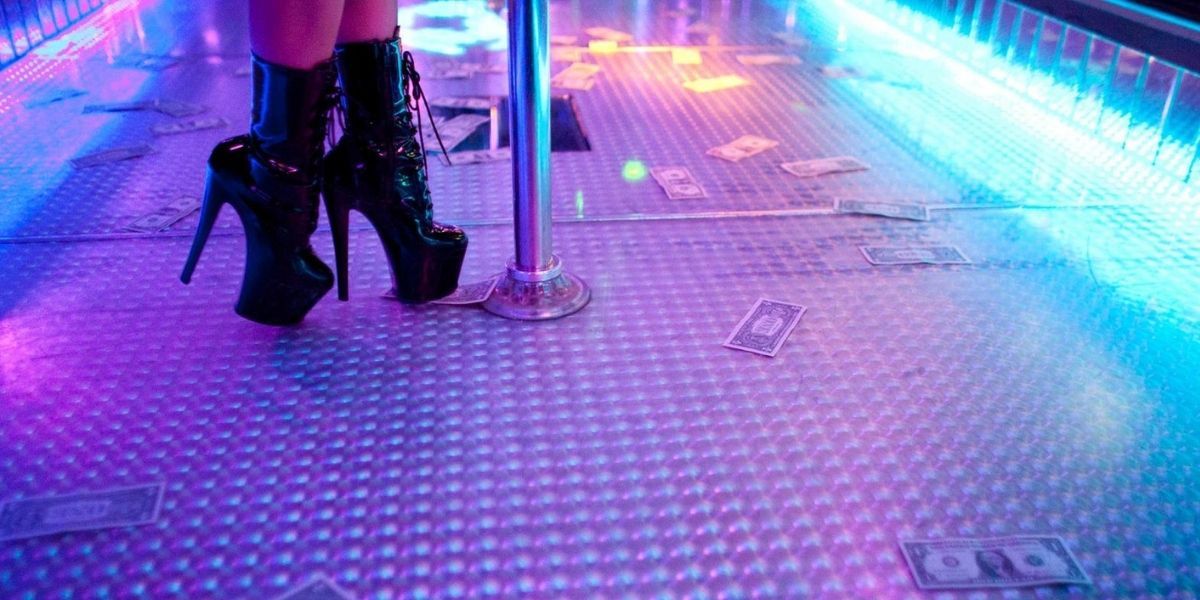 A Night At Aces

A couple of weeks had passed since I started back at Aces. While my dancing had improved, and I was getting more and more requests, I still had not seen Estran. I had taken to wearing wigs and contacts while dancing, just in case. I did not want him recognizing me. Gideon had stopped by earlier to say hi, and watch some of the other girls, but I know he was there to support me and help keep an eye out for Estran. I had given him a terrible description, mainly because I could barely remember what he looked like. It was the eyes, though. They were large, black, and beady. A shark’s eyes, always on the hunt, always on the prowl for his next meal, which may be more than just sex.

As my break rolled around, I went to the back, threw on my coat, and stepped outside. “You are quite the talented dancer, Val,” Arrin commented.

I just smiled. Since our first altercation, he had gotten much politer with me and even helped me out when he was covering the front, and I was trying to squeeze through to get to the back of the building. I think he had a crush on me, but I had made it clear one night inside when a client was getting handy that I was in every way off the table. Tania had him banned for life. Unless permission was given, unless consent spoken with witnesses was there, a client was not to touch the dancers. It was for our protection as much as theirs. Arrin had to come in and escort the guy out.

“Thanks, Arrin. Why do you not take a break? I can cover the door for a few minutes?” I offered kindly, smiling up at him.

“Shucks, Val. Thanks, but no. Tania would have my hide if I let you watch the door.” He laughed, and I caught a little blush rising to those leathery cheeks.

“She would have both of our hides…and I am not sure shark skin tans so well.” That sent us both into laughing fits before the next shift came in.

“Thank you, Val,” Arrin said suddenly, quietly, after the girls went in.

“For what?” I asked patiently.

“For not hating me after…” His hand wrapped around the back of his neck in a sheepish move, and I smiled.

“We got off on the wrong foot. I am glad to call you my friend, Arrin,” I replied honestly.

“A friend would show me her outfit.” And the teasing was back, but it was okay because he had said what he needed, and so had I.

I laughed and opened my jacket to show him the nurse number that had been requested for my next client. A catcall came up from down the alley, and I closed my jacket up tightly. A strange look came over Arrin’s face, but he brushed it off and smiled. “You had best get in, don’t want to keep your client waiting.”

“No, you are right about that.” I placed my hand on his and made my way back inside, dropped my coat off, and then walked back into the club proper. There was a greasy weasel of a man at my corner, and I shuddered inwardly, revolted. The things I did for revenge.

The man paid handsomely for a private dance, so I drew the curtains closed, put on my best fake smile, and began. The music was the only thing I paid attention to until I felt his erection threatening to break out of his pants. It happened frequently, and normally I shrugged it off, but then he tried putting his hands on me. I growled at him, and he backed off.

“I paid for a private session,” he barked out, and I almost called for security.

I stopped and looked down at him. He was dripping sweat and bleeding arousal. “You paid for a private dance, not a rub-down. There are other clubs for that.” He stood up, and I pulled the curtain open. “Your time is up. Or, I could call security and have you banned. If you are on the premises, you know the rules. No one gets a free pass.”

The look on his face was pure loathing. I stood there as he spat in my face, and said, “You’ll regret this, whore.” The man’s voice was venom, and I wiped the spittle off my face.

“I have been called worse. Go or get the boot. Tania is not forgiving with clients who are rude,” I stated one last time before he stomped out. I made my way backstage again and cleaned up. I was done with private clients for the night. I washed my face, changed my outfit to a sleek silver number, and made my way on stage. I must have been wearing my angry face backstage because Syl, who was supposed to go on, backed away. I needed stress relief.

“Go ahead, Val. You need it more than I do,” she mumbled.

I looked at her and realized what I had done. “Sorry, Syl. I will give you the tips.” She bowed comically and let me out to the stage, chuckling as I walked past. “Saucy,” I muttered and strode out. They greeted me with applause, and when the music started, all my worries faded away.

I lost track of how long I danced. Others came and went. I worked my way around the stage, moving from the center off to the side, which was fine by me. And then someone caught my eye. He was a large man, built like Leon, with large beady black eyes. And when our gazes met, I knew him in an instant. Estran had come back to Aces. I was so shocked I almost lost my balance, but I recovered quickly. This was why I did not look the men in the eyes while I was dancing. I did not want to be thrown off my game. But here he was, my prey, and he did not even know it. When I finished, I walked offstage, trying not to hurry, and told Tania.

“Are you sure, Val? It could be someone else.” I just stared at her incredulously. “Okay, or it’s him. What are you going to do? Are you ready to face him?”

I looked down at what I was wearing, or not wearing, and sighed. “No. I am going to clock out for the night and follow him. Perhaps I can glean some information about his whereabouts.”

Tania nodded and left, and I went to get changed. By the time I made my way back into the club in regular clothing, Estran was gone. “Fuck,” I swore under my breath. But I had his scent, even in this crowd, so I followed him through the club and out of the building. As I pushed through the line waiting to get in, I caught the scent of someone I had not been expecting. “Alaran,” I whispered, almost in a trance.

I completely forgot about Estran. Finding my brother was a core mission to why I had returned to New Orleans. It was part of why Ka’ahupahau had sent me here. That and to find the Source. I began roaming the streets of New Orleans, traversing little known side-streets, all with Alaran’s scent in my head. I was not paying attention to where I was, when it was, or who was around me. All I knew was my brother was nearby.

I passed by LaLaurie Mansion and shuddered. People made deals with Crossroads Demons here all the time, but I would never sell my soul. Would I? If it meant finding my brother or Estran? I shook my head and walked away, safely knowing that I would never be so desperate as to barter my life away. It was then that I realized just how far I had come and how long I had been gone.“Fuck.” I checked my phone, my crappy little flip phone I kept for work, and realized it was time to go back. I grabbed a quick bite after leaving the crossroads and ran most of the way back to Aces.