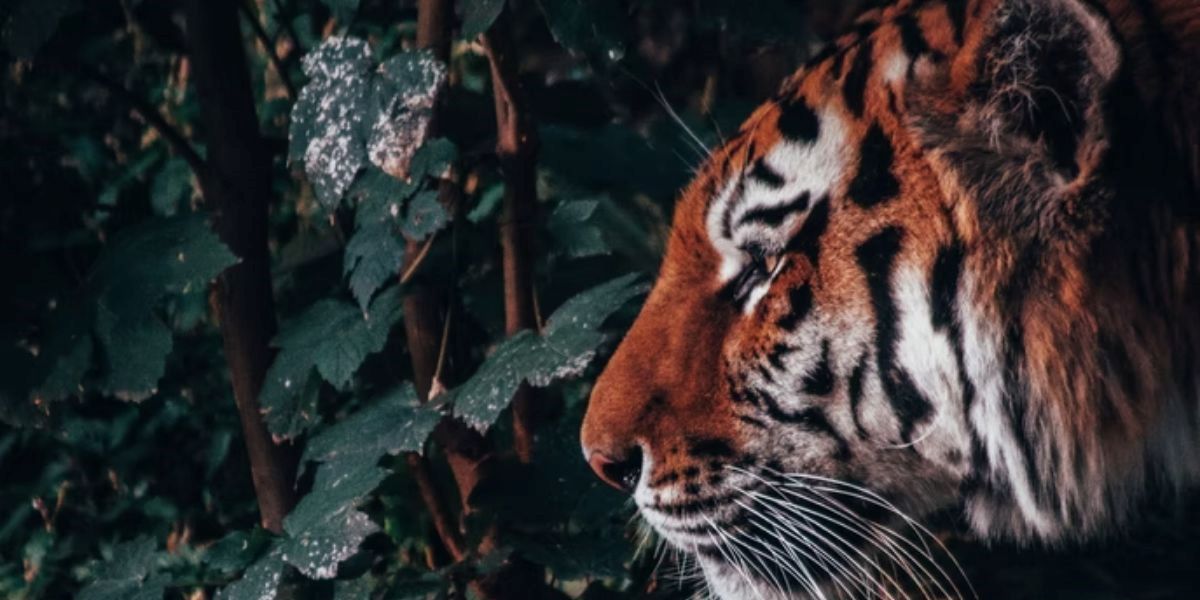 My shifts were becoming more frequent the longer I stayed in New Orleans. They never occurred in the bayou, only in the city itself. They all started the same, with an undeniable rage building in my chest. Like boiling water breaking the threshold of a pot and sizzling onto the burners, my rage would well up and consume me. My body boiled like the water until finally, I couldn’t fight it anymore, and I would shift into some sort of apex predator.

My latest attacks came as a Siberian tiger. Parts of me loved the rage, and the carnal desires that roared through my body got me hard. What I hated, though, was the damn lack of control that caused me to wreak havoc. It was getting tiring, and something had to change.

I stared at my phone, looking at my texts. The last message I had received from Val was a simple warning to stay away until she was ready, but I was at a loss. She was the only one I knew in this god-forsaken city. I needed someone. I needed a friend. I clenched my jaw and typed out the text.

I sat on the edge of the king-size bed that nearly filled half of my small bedroom. Bubbles appeared and disappeared on the screen before finally disappearing for good to reveal her simple but cold response..

My skin burned as I made the confession.

“Reaching out for help, Brother?” Alo spoke from beside me.

I glanced over at my brother sitting beside me on the edge of the bed. “Not all who wander are lost, dear Brother.” I smiled at him.

“And the owl never loses his way,” Alo confirmed.

Valeria: How many this time, Sani? How many did you kill this time?

I snarled at the anger in her text.

Sani: I don’t know. I don’t remember. I never remember when I lose control. I blackout. But I don’t want to do this anymore, Val. The meaningless killing, the carnal desire to kill without control. I’m tired of being all evil.

Typing bubbles appeared on the screen and then disappeared before reappearing again and finally disappearing.

Valeria: Where are you?

Sani: At home, in the bayou.

I sighed and set my phone down, standing up and making my way to the kitchen. The last time Val and I had spoken, I’d promised her a fresh gator when she came to the bayou. I intended to keep that promise.

I took the gator out of the freezer and breaded it in a special mix I had discovered across my travels. When the oil in the cast iron pan crackled, I tossed the meat in. I pulled out a bottle of Jose, poured two shots, and sat them on the table while the gator browned.

I heard the cracking of branches outside my cabin and quickly crouched next to the window. I pulled my knife from its sheath and peeked out. Val’s stunning form came out of the darkness like a goddess emerging from the ocean. I slid the blade away, tucking it  into the back of my waistband before opening the door.

“Val…” I started, at a loss for words. “I made you gator and tequila shots.”

She smiled softly and brushed a strand of dark hair out of her face. “It smells heavenly in here.”

I nodded with a smile and waved my arm, welcoming her inside. Val stepped through the door, and I closed it behind her. We walked to the table, and I plated the food as it finished cooking. I sat the meal and the tequila in front of her before taking a seat across from her.

“I can’t control it sometimes,” I began. I poked at my food with the white plastic fork, waiting for a response.

“The food?” she asked as she took the shot in one steady stream. “Or the murder?”

I chuckled slightly and brought a piece of the sizzling gator to my mouth. “The murder.” The flavor of the meat filled my mouth, and I closed my eyes to savor the taste.

Her breath hitched as the words left my mouth. “And you want it to stop? Or you just want to remember it.”

“I want control of my body and actions,” I said with a sigh.

Val eyed the bottle next to me, and I slid it across the small folding table to her. “I am not sure what help I can be there, Sani,” she said before taking a large swig of the tequila.

“That’s because you are lost, Brother,” Alo’s voice rang out from behind me.

I gritted my teeth and continued. “Ever since I arrived in New Orleans, things feel different. I don’t have this innate desire to be evil.”

Val chewed on her lip as her eyes wandered over my face. “Did you only turn evil because of your father? Has Alo not been trying to keep you on a lighter path?”

At her question, I blinked rapidly a couple of times. I hadn’t thought about my father in days. “I… I’ve never thought about when the evil started, or why. It just felt good to have power and be feared. Now, it’s boring. It doesn’t excite me. I am just tired of the darkness.” I massaged my temples slowly with my knuckles. “Damn, Alo, it only took you a couple of hundred years, but you may have broken me.”

Alo laughed from behind me.

I whipped my head around and glared at my brother between squinted eyes. “Of course, you would show up to gloat. Go away before I change my mind.” I looked back at Val and rubbed the back of my head. “Sorry.”

Val smiled and shook her head as she continued to eat her food and drink the tequila. I sighed and continued, “It’s frustrating not being able to control my shifts. I haven’t always had this problem, ya know? I was evil but didn’t mercilessly kill. It didn’t start until…” A shudder went through me as I looked back down at my food.

After a moment of silence, Val spoke up. “Until what, Sani?”

I looked up at Val, and instantly her face turned from fear to sadness. The pain that must have been radiating from my expression sapped all the fear out of her. “Have you ever heard of the Navajo Long Walk?”

Val silently shook her head as she put her plastic fork down on her plate. It was as if she knew she was going to want to hear this story.

I sighed and began my tale. “In 1864, the American government was expanding west into my people’s home. We tried to fight back, but their technology was too advanced. They had hunters who had trained their entire lives to kill creatures like skinwalkers. They rounded us up, clan by clan. These hunters captured or killed skinwalkers on sight. Nearly 10,000 Navajo women, men, children, the elderly, healers, skinwalkers were all marched out of their lands. Not counting the thousands that were killed.”

Val’s eyes glistened as I spoke. She nodded understandingly like she knew the pain that the humans could bring upon others.

I closed my eyes, fighting back the tears tearing away at me inside. I opened my eyes with a deep breath and continued. “That’s when I first lost control. A hunter had me down, and I couldn’t shift. I tried and tried, but I didn’t have enough strength. His men surrounded us and he was ready to kill me. He shoved a blade into my chest, and I blacked out. I remember nothing until I came to, surrounded by the mauled bodies of all the men who had been around me. I was in the form of some kind of animal that and covered in their blood.”

“That does not seem evil. That was self-defense,” Val said as she reached across the table, her hand hovering above mine.

“But it didn’t stop there,” I admitted. “It happened many more times over the next few months while we fought the army. I would awake covered in blood with body parts strung around me. It felt good then. I had just lost everything I had. I was alone.”

Val let her hand rest against mine, stroking her thumb over my knuckles. “I get that. I really do. When I lost my parents and two of my brothers, I-I do not like remembering who I was back then.”

I bit my lip as I looked down at her hands. I took her thumb in between my pointer and middle fingers. “I don’t want to be alone anymore.”

Val looked between our hands and my face before she spoke. “I asked you this one before, What do you want?”

“I can help with that. I-I need something from you too, Sani,” Val said. I wrapped my hand around hers, and she stood. She walked around the table and sat in my lap, her body melting against mine. She licked her lips softly and said, “I was hoping you would help me embrace my darkness, if only a little.”

I looked up into her eyes. “I wouldn’t dream of giving up being evil, just not uncontrollable. So yes, I would love to help.”

She bit her lip as her steady hands became shaky. “Then there is something you need to know about me. I am technically engaged.”

I arched an eyebrow as I brought my head slightly back. “Only technically?”

She paused and took in a deep breath. “With us being different social standings and cross-species, it is not likely the wedding will go through. He, um… well, he has allowed me, and I him, freedom should something come up.”

I shrugged my shoulders. “I’m more interested in the why, Val. Why do you want to embrace your darkness?”

“I enjoyed it when I hunted down the man that raped my friend. I relished in the kill, the torture, all of it. And I think,” she paused and looked down. “Ever since I began healing from those psychological wounds, I have been imbalanced. I realized it on my hunt the other day. I have been denying my animal side, even as I shift.”

“I can help you embrace that side of you,” I said confidently.

Val nodded and chewed on her bottom lip. “And I think I can help you find some way back to the light.”

“Yin and yang,” I smiled at her. We locked eyes and stared deep into one another’s soul. We had both opened up a lot that night, so looking into her soul had a whole new meaning for us. Something about her was different, but I didn’t know what.

“There is something else,” she admitted. She leaned closer to me. The point of her nose resting against the bridge of mine. “I want to kiss you, but only if you wish to. I would understand if you do not.”

I smiled softly and leaned in, letting our lips meet and allowing Val to dance like she had danced the night we met.