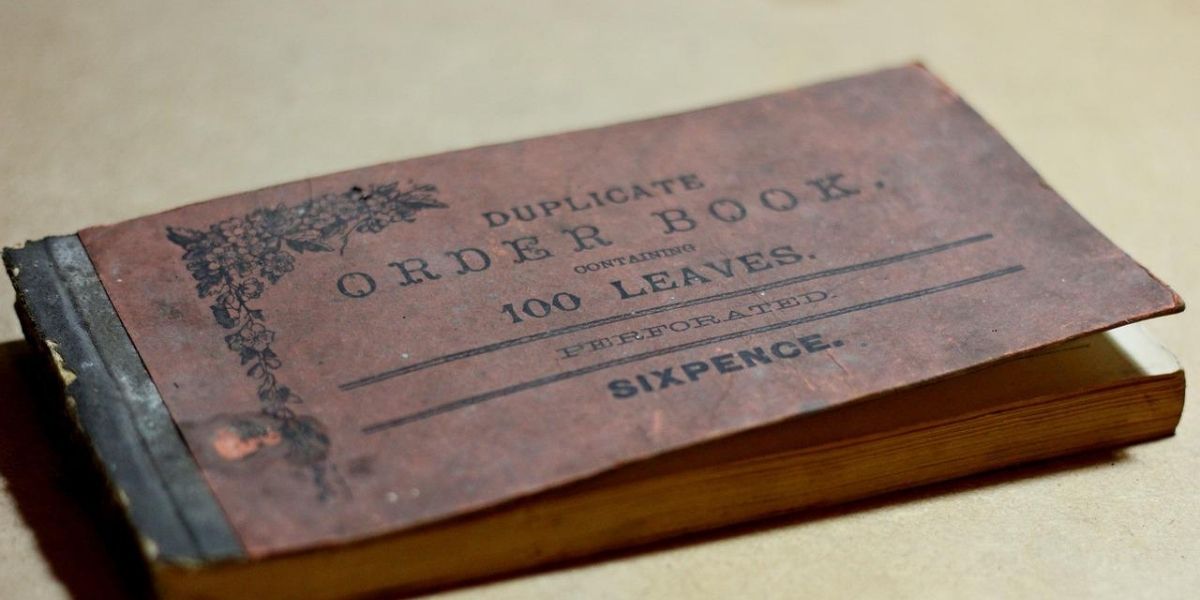 What was supposed to be a couple of hours of research ended up being two and a half weeks of completely restructuring some of the old ledgers. I hated to admit it, but Blake had been right about me needing a new computer to store all my information. The thing was, I hadn’t even scratched the surface.

Most of the ledgers from my great-grandmother’s shop were handwritten and in sad shape. I decided to photocopy each one and set up spreadsheets. Darrell managed to find boxes of receipts and other odds and ends in the basement. Someone had had the good sense to mark each box by year, so I at least had a place to start.

As I went through, I realized that there were a lot of transactions between the shop and two individuals with the last name of Flemmel. I knew that name, or at least I thought I did. The journal in my trunk was dedicated to someone named Flemmel. Could they be related, or was this merely a coincidence?

I heard a cheery voice behind me as I stood at the copier. “I thought you weren’t interested in doing any of this?”

I turned to see my cousin grinning from ear to ear. Part of me wanted to smack him, but he was right. I was having the time of my life. “Shut up,” I retorted. “I’m just trying to learn more about our family.”

“Bullshit,” he sneered. “You can’t stand to see the books all jacked up. I can see it in your eyes. You won’t rest until you get everything in order, so it makes sense. Am I right?”

I felt the heat rush across my face and turned back to the copier. “I’m just trying to save the originals from being totally lost. Besides, it’s not like you’ve got the time to do this. I might as well. It’s a good way to get closer to Grandma Joan.”

I heard Blake laugh as he walked toward the mini-bar. “Can I pour you one?”

“No, not right now,” I replied. “I’ve got another pile of receipts to copy and want to get to the bottom of that box before calling it a day.’

“Wow,” he said in a genuinely shocked tone, “you’re really into this, aren’t you?”

This time, I couldn’t hide my smile. “Yea, I kind of am. Hey, does the name Flemmel mean anything to you?”

Blake took a sip of his drink, mulling the name over in his mind. “Flemmel? Yea, I remember my dad talking about the Flemmels. They were friends of the family from the old country. I met Andrew Flemmel when I was a boy. He struck me as an odd duck, but Dad always said the Flemmels had a way of making things happen. Why?”

“Probably, I guess. I didn’t know much about them, only what my father told me. He just said Mr. Flemmel was one of Grandma Joan’s go-to guys. I had no idea what that meant then, and I still don’t. What kinds of stuff did they buy from us?”

“Well, that’s just it,” I said in confusion. “From what I can tell, it looks like Grandma Joan was buying more from them than she was selling. Check this out.” I pulled up a specific page and enlarged the image. “On Friday, September 1st, 1922, Joan bought a porcelain vase from Mr. J. Flemmel for the amount of $85.00. I looked it up, and that’s almost $1,500.00 in today’s money. That’s not exactly the kind of thing someone sells in a trinket shop.”

I looked up to see Blake’s face go into full businessman mode. “I take it you haven’t found anything about her selling the item yet?”

I shook my head. “No, but I’ve only gone through a few ledgers. Darrell says there are a lot more in the archives and a hell of a lot of boxes in the basement. It could take me months to get through all of this.”

“Really?” Blake said with a strange smirk on his face. “Well, I’d say it was time you had a real office instead of trying to work in a stuffy boardroom.”

I shot him a look of disdain, but it would be a lot easier if I had my own work area. I’d always felt as though I were taking up valuable space in the boardroom. “This won’t be a permanent thing, Blake. As soon as I get all these ledgers and records in order, I’m done. I haven’t even gotten my apartment put in order. I’m still living out of boxes and eating mostly take-out.”

“So, take a day or two off,” Blake snorted. “It’s not like you have to be here every day. Besides, giving yourself some time away might be a good thing. Come back in a couple of days with fresh eyes.”

“I know,” I quietly replied, “but I just can’t seem to let it go. I want to find out more about Grandma Joan, and now I have to figure out where that vase went. There’s something odd about all this, and I want to know what it is.”

“Yep, you are definitely a Montgomery.” Blake laughed. “I know you don’t want to hear that, but it’s true. I’ll have the staff get your new office set up. I’d tell you to pick out some furniture, but something tells me it would be a waste of time, so I’ll do it myself. I’ll make sure you have your own copier and anything else I think you’ll need. Once it’s all put together, we’ll get you moved over there. Any requests?”

I thought for a moment before answering. “Just one. Make sure I have my own coffee pot, so poor Lucy doesn’t have to wait on me. I’m sure she’s got better things to do than keeping my coffee cup full.”

“Done,” Blake all but squealed, “but just so you know, Lucy’s only real job here is to answer phones and accept packages. Maybe if you were to give her something else to do, it would make your job easier and make her feel like she’s doing something productive.”

I was really getting tired of Blake being right.

He was just about to leave when Darrell came through the door. He looked from me to Blake, then back to me. “Did I interrupt something?”

“No,” replied Blake, “but I am going to need your help. Cherish has agreed to having her own office, and I’d like you to help me get it set up.”

“You’re okay with this?” Darrell asked, looking at me with amazement.

I nodded and looked away. I didn’t want to admit that I was beginning to enjoy working at the archives.

As they got ready to leave, Darrell asked me if there was anything else I needed before he left. I asked him to send Lucy in when they passed her desk. Within moments, Lucy was at my beck and call. “Miss McKenzy, Mr. Portland said you wanted to see me.”

“Yes. I was wondering if you’d like to help me. I’m starting to get a little overwhelmed and could use a friendly face.”

“Go through those two boxes over there and put all the receipts and papers in order by date, if possible. I’m trying to pair up ledger dates with receipts or proof of purchase. Honestly, I’m not sure what I’m looking for. Maybe if you see something interesting, it might help.”

Without hesitation, Lucy got to work. I copied a few more pages from a ledger, then set about putting them in my spreadsheets. As I did, I heard Lucy whistle.

“Wow!” she exclaimed. “I bet that was beautiful.”

“What’s that?” I asked, more out of politeness than anything.

“I found a receipt for an 18th-century Venetian Carnevale mask. I would have loved to have lived in that era.”

“A what?” I asked, my curiosity piqued.

“You know, a mask from Carnival. They were usually decorated with feathers and lace. This says it was adorned with peacock feathers and originally owned by the Celsi family.”

As Lucy read me the details, a knot began to form in the pit of my stomach. Something told me that I wasn’t going to find that mask in this building. I was almost positive that the mask she was describing was hidden in a box in the trunk at my apartment. I turned and looked up at the portrait of my great-grandmother and felt as though she were looking back at me with pride.

As I turned back to my computer, I knew for sure that this wasn’t going to be some off-the-wall hobby. I was going to bring my family’s treasures back to light. Not because I wanted to, but because I had to. The idea sent my mind into a tailspin. It seemed I was in this for the long haul.