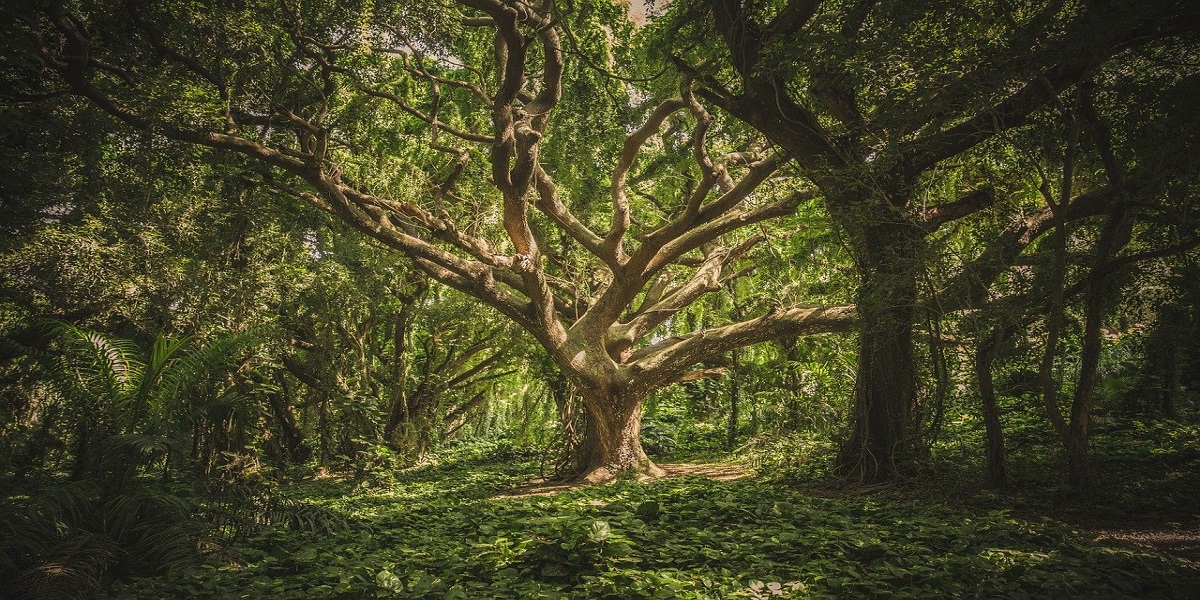 Branches in a Tree

It had taken Darrell and me a little longer to pack up all my belongings than I’d thought it would. He tried to convince me to get rid of a lot of stuff, but I couldn’t do it. I just couldn’t bring myself to go through everything, but it was time to go. In the end, I just threw my mother and grandfather’s things in boxes and loaded them onto the moving vans.

I rode with Darrell in the rented SUV. I made sure the little statuette was packed in my personal stuff and by my side. The same was true for the box I’d found in my grandfather’s closet. I hadn’t gone through it yet, but I didn’t want it getting lost in the shuffle.

It was a twenty-six hour drive to New Orleans, so Blake had made reservations for us in Salina, Kansas. We found our hotel, and Darrell went in to get our room keys. As he did so, I checked on my grandmother’s statuette, nestled in a duffel bag just behind my seat. As I reached in and touched it, I felt a strange tingle course through my hand.

I grabbed the duffel bag and my suitcase as I exited the vehicle. Darrell offered to carry them for me, but I just kept walking. He handed me my key, and I went to my room without so much as a word. In fact, I’d barely spoken to Darrell since the day he’d arrived, and I’d overheard his conversation with my cousin.

Once inside my room, I finally let my guard down. I kicked off my shoes, pulled a bottle of bourbon out of the duffel bag, and relaxed. In less than twenty-four hours, I’d be in New Orleans and begin the rest of my life. I wasn’t sure if that was a good thing or not, but it was going to happen either way.

As I sat there, my room phone began to ring. I had a feeling it was Darrell as no one else knew what room I was in. I let out a heavy sigh and got up to answer. When I put the receiver to my ear, all I heard was static. Then, a distant voice said my name, “Cheeerissshhhh.”

A chill ran down my spine. I couldn’t move. I couldn’t make a sound. My hand gripped the receiver, turning my knuckles white, and I began to shake uncontrollably. There was something strangely familiar about that voice.

The static coming through the receiver grew louder, causing my pulse to race. As I stood there, petrified, a loud banging came at my door. I jumped at the sound but was still unable to move.

“Cherish,” I heard Darrell call out, “you feel like getting something to eat?”

I tried to scream, but my voice seemed to have frozen in place. I finally managed to squeak out an audible cry, but it wasn’t loud enough for him to hear.

Once again, he beat on my door. “Cherish, are you in there?”

This time, I was able to let go of the telephone receiver, letting it drop onto the desk.

“Cherish!” he yelled with concern. “You okay in there?”

“Darrell?” I managed to say loud enough for him to hear.

He beat on the door again. “Cherish, open the door. Do I need to call security? Cherish, talk to me.” The rise in his voice told me he had real concern for my situation.

I took a deep breath and managed to walk to the door. I turned the knob just enough for him to open it up all the way. He looked into my eyes, and the fear I felt, shown on his face.

“What happened?” he asked, not taking his eyes off of mine.

“The phone,” I said, still shaking.

He walked over and picked up the receiver. He listened for a moment, then hung it up. “It’s just dead air,” he said, walking back to me. “What happened?”

He helped me sit down as I began to tell him my story. When I mentioned I had heard my name, his face went white. It was as if he knew exactly what it all meant. Though I had been annoyed by him since he’d shown up, I was happy to have him there at that moment.

He got me a glass of water, then sat down beside me. “Cherish, did you recognize the voice?”

I shook my head, but that wasn’t exactly true. There was something about it that connected with me. I was sure I’d never heard that voice before, but at the same time, I thought maybe I had.

He gently took hold of my chin, turning my head until I was looking directly at him. “Cherish, I need you to calm down and think. Was it a man’s voice or a woman’s?”

I closed my eyes and tried to control my breathing. “I think it was a woman’s voice. I’m not sure as it was so faint, but I believe it was female.”

“Okay,” he said with a nod, “now, did it sound even the least bit familiar? Like someone who’d come into your shop or an old friend you forgot to say goodbye to?”

“No,” I said with a heavy sigh, “nobody would know to call my room. If it was someone I knew, they’d have called my cell.”

“Yeah, that makes sense,” he said, dropping his eyes. Then he looked back up at me. “Did you do anything out of the ordinary before the phone call?”

I could tell by his tone that he was grasping at straws, but at least he was trying. “No,” I said, trying to focus on all the details leading up to the moment the phone rang. “I just came into my room, kicked off my shoes, then grabbed my bottle out of my duffel bag.” Instantly, my face turned white.

I began to shake all over again. I opened my mouth to speak, but only silence emerged. I could tell Darrell was growing more concerned, but I remained silent. My mind became a swirled blur.

“Cherish,” he all but barked, “what happened?”

I walked over to the duffel bag and pulled out the statuette. For the first time since I’d met him, I allowed him to see it for himself. As I handed it to him, my hands began to shake harder than ever.

He gently reached out and took it from my hand. As he held it, I watched him close his eyes. I knew that look. Up until that moment, I’d thought I was the only one who did that. “Oh my god,” I said, staring at his face.

He opened his eyes and looked at me with questioning eyes. “What?”

“You knew I was a sensitive because you’re one too.” Darrell couldn’t hide the look of acknowledgment in his eyes.

“Really?” I asked, not knowing what he was talking about. “You have other sensitives in your family.”

Darrell laughed a little too hard before finally looking up at me. “Yes, many of the Portlands are sensitives. It’s one of the reasons my uncle was so drawn to your grandmother. Trouble was that he knew the family secret and, from what I understand, your grandmother didn’t.”

I stared at Darrell, tilting my head to one side. I had finally quit shaking and was beginning to feel defiance once again. “Family secret?”

He turned his head away and whispered, “Oh, this ought to be fun.”

I crossed my arms over my chest and shifted my weight to one hip. I didn’t know what he had to say, but I knew I wasn’t going to like it.

He took a deep breath, then stood to face me. “Okay, here it is. The Portlands and the Montgomerys are distantly related.”

My mouth dropped open, and my arms fell to my sides. “What? We’re related? You didn’t think this was something I might need to know?” My tone grew louder with each question.

“Cherish, I wanted to tell you that night at the archives, but Blake didn’t think it was a good idea. He wanted to wait until you’d already gotten settled in, and we could talk about your family history from the beginning. I am sorry.”

“Wait,” I said, feeling a little grossed out, “wouldn’t that be…just wrong?”

Darrell chuckled once again. “Well, not really. You see, our lineages split a long time ago.”

I was at a loss for words. I stood there for a moment, then walked over and grabbed my bottle. I took a long swig, then sat down in the chair. “Oh, my god. I’m related to…you?” I hadn’t intended for my words to come out so hostile, but the thought had knocked me for a loop.

“Yep, I’m afraid so.” He tried to sound cheerful, but I could tell that I’d really hurt his feeling this time. “I’m sorry to say that you and I are just two branches of the same tree.”