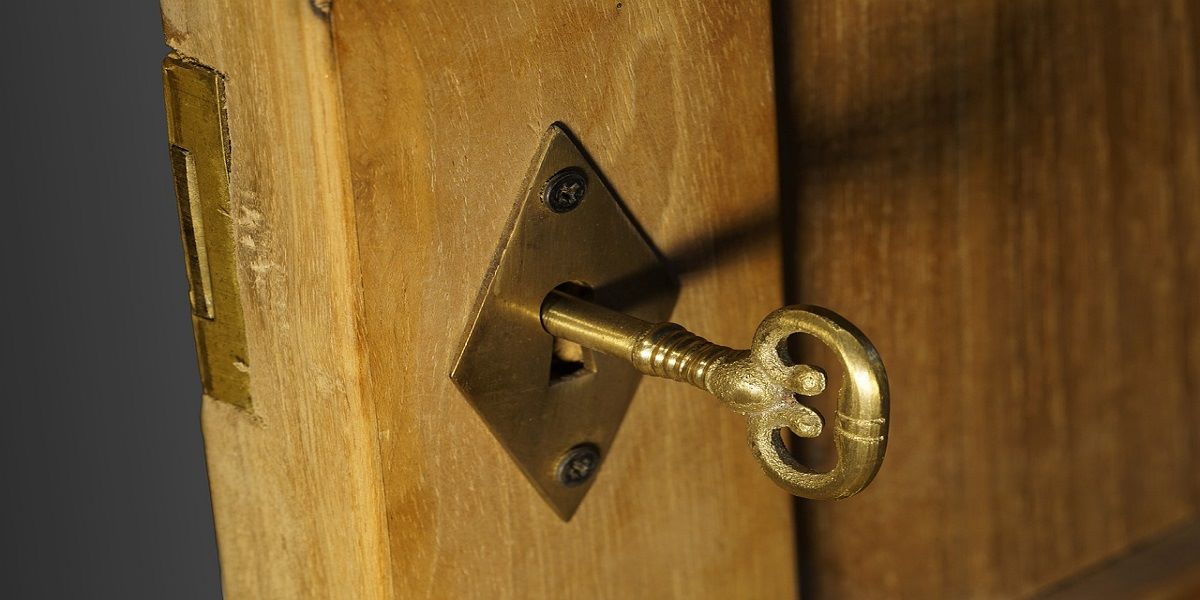 Behind the Locked Door

Once I’d gotten through my mother’s funeral, I began the process of packing up our lives. I spent my days at her house to deal with those who’d stop by to offer condolences, but my nights back in the loft above my store. It seemed a lot darker and quieter than I remembered. I chalked it up to my time in the big city but, for the first time in my life, I didn’t like it.

The day after the funeral, I walked through the house, trying to decide where to start. I looked around the kitchen and thought of all the times my mother and I drank coffee at that table. I looked at the stove and remembered Grandpa teaching me how to make pancakes, without burning them or myself, on an old, cast iron griddle.

I walked through the living room, not really ready to look at all the stuff in there. I moved down the hall and prepared myself to enter my mother’s bedroom. As I did so, I looked to my right to see my grandfather’s closed bedroom door.

After my grandfather had passed, my mother had shut the door to his room and left everything as it had been on that day. I honestly don’t know if she ever went in there after I’d moved out, but had a feeling the answer was no.

I went into Mother’s room and took a deep breath, still able to smell her rosewater perfume in the air. I laid my hand on her pillow and closed my eyes. Suddenly, my heart began to hurt, and my head was pounding. I found it hard to breathe, and my feet went numb. It was as though I were reliving her last night in that bed.

I ripped my hand away, and the pain was gone. Tears ran down my cheeks as I backed up just a bit, knowing I had to get out of there. I turned on one heel and got a clear shot of the china hutch in the living room. There, like a beacon in the night, was the little statuette.

I closed my eyes and turned toward my grandfather’s room, deciding that this was as good a time as any to see what lay beyond that door. When I grabbed the knob, I winced and immediately let it go. It was extremely hot. I’d experienced that sensation before, but it was rare.

I took a deep breath and grabbed the knob once again. As I tried to turn it, I found the door to be locked. That shocked me more than the heat I’d felt. Why the hell had she locked it? I looked through the keyhole, but it was dark. I did notice that I’d only need a skeleton key to get in, and I had hundreds of them back at the shop.

I went back into the living room and did a quick sweep of my surroundings. All those little knick-knacks lining the walls seemed to call to me. They wanted me to play with them as I had done when I was little. I’d forgotten how much I loved being in this room.

I looked over at the china hutch and cussed under my breath. Why was I suddenly so disturbed by that little statuette? There was a time when I’d stare at it for hours, imagining the beautiful music behind their waltz. Now, it felt strange to even glance at them. It was as though I were intruding on an intimate moment.

I averted my eyes and looked through the rest of the things in the hutch. There were a couple of crystal vases, some little porcelain dishes, and a large, black pitcher with white magnolias painted on it. Though I’d seen it a million times, I’d never really paid it much attention. Now that I knew magnolias were the state flower of Louisiana, it made more sense.

For some reason, I suddenly felt the need to hold that pitcher. My entire life, I’d looked at that thing and felt nothing. Now, it was calling my name. I opened the door to the hutch and felt a slight breeze whip through my bangs. When I reached down for the pitcher, I saw something inside. A key. The key. The key that would unlock my grandfather’s room and, ultimately, more secrets.

I pulled the key from the pitcher and found it to be almost as hot as the doorknob had been. I ran to my grandfather’s room and opened the door for what was probably the first time in years. As I had expected, it looked much the same as it had some twenty years earlier. His bed was made, his slippers were under the nightstand, and a pair of tan trousers were draped over the back of his desk chair.

As I entered the room, I felt the heaviness that had been trapped within. I figured it was from not having a window opened in there for all that time. I walked over to his dresser and peered down at his belongings. His watch was still in the little dish I’d made him in second grade. All his colognes were pressed against the mirror. As a child, I saw them as my grandfather’s Navy buddies, all lined up and ready for battle.

I started to open one of the drawers, but hesitated. It dawned on me that I had never seen the inside of his dresser. I’d never even taken a peek when I was little. It was just something I knew not to do.

I pulled one of the small top drawers out. The guilty feelings that came over me were almost too much to bear. “Get it together, Cherish,” I muttered to myself, embarrassed at my childlike attitude.

I pulled the drawer open and found several pairs of socks, all lying in an orderly fashion. It wasn’t surprising, as that was the type of person my grandfather was. I looked through them, but there was nothing else there.

In the second top drawer, I found several pairs of boxers lined up in the same fashion. Though slightly grossed out, I rummaged through them, but again, nothing. As I began to open the first full drawer, something told me to stop and go straight for the bottom drawer. When I opened it, my jaw hit the floor.

Inside, I found a white dress, a pair of pantyhose, and a pair of white shoes. As I pulled the dress out, a picture beneath it flipped up into the air. When it landed, I looked at it and saw it was my grandparents’ wedding photo. My grandmother was wearing that very dress on her wedding day.

I also found a stack of letters. They were all addressed to my grandmother and all from New Orleans. What broke my heart was that none of them had never been opened. Why? Had she put them there unopened, or had my grandfather hidden them from her? A knot began to form in my belly.

I laid the letters on the dresser, fully intending to take them with me. I stood up and turned to the closet. It was probably the only door in this entire house I’d never opened. I rushed over and flung it open. His clothes were still on hangers, and his shoes were still lined up on the floor, but I knew there had to be something else.

I pushed the clothes to one side and found a set of shelves almost hidden in the back. There were a few shoe boxes, a couple of pairs of gloves, and an old-fashioned camera. On the floor, beneath the shelves, set two larger boxes that had been taped shut.

I pulled one of the boxes out to see the word Navy scrawled across the top. As I pulled the other box out, I found the word Lizzie. I wanted to go through that one first.

I set the second box on the bed and put the letters on top of it so I wouldn’t forget them. I decided to take them all back to my shop before opening them. For some reason, I just couldn’t open them in that house.

I pushed the first box back into the closet and closed the door. There was an eerie feeling about this room, but my emotions had been running high for several days. I knew I couldn’t trust my instincts at that moment.

My grandfather’s pillow caught my eye as I was picking up the box and letters. I remembered that he had died in his sleep, but it occurred to me that he probably died on that very pillowcase. My hand trembled as I reached over and placed my palm on it.

A strange calm came over me, and then I was hit with a bolt of terror. I couldn’t breathe and tried to fight, but felt as though something was holding me down. I couldn’t scream. I couldn’t gasp for air. I couldn’t move. What the hell was happening?

Finally, I was able to pull my hand from the pillow. My heart was racing, and sweat beaded on my forehead. I tried to control my panic, but was still having trouble breathing. As I worked to control myself, a strange vision came over me. An image of my mother’s eyes, not the eyes of the woman who’d raised me, but the eyes of a woman enraged.

“No,” I said matter-of-factly. “Get out of your head, Cherish. You’re starting to make shit up.”

I tried to convince myself that what I’d felt was just my own overactive imagination. However, I couldn’t get past the feeling that my mother had killed my grandfather.