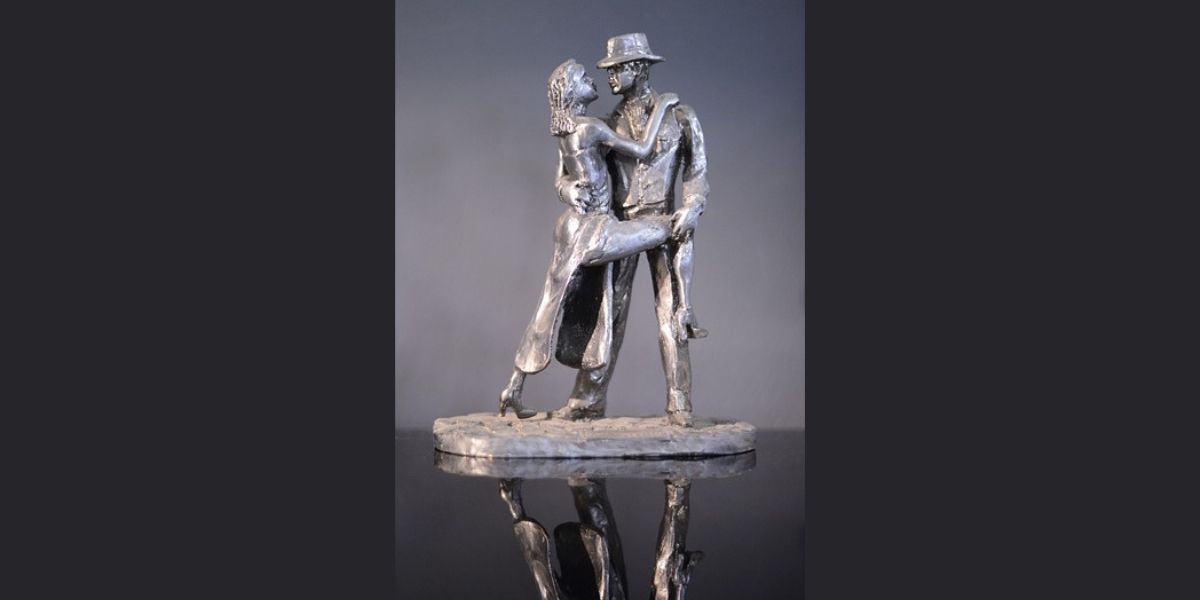 I couldn’t take my eyes off the little statuette at the top of the bookcase. It was exactly like Grandma’s. Same muted colors, same glossy finish, same white-painted glint in the skeleton’s empty eye socket.

Blake glanced up in the direction I was pointing, then shot Darrell a strange look. Though it only lasted a second, I caught it in my peripheral vision.

Blake finished making our drinks and handed me one. “It’s called Dancing with Death. It’s been in the family for almost a hundred years. From what I understand, there used to be two of them.”

I slammed my drink back and set the glass in front of Blake before walking past him. Never taking my eyes off the statuette, I grabbed the bottle of bourbon off the bar. I took a healthy swig, wiping my mouth with the back of my opposite hand, still fixated on the dancing couple. “What happened to the other one?”

“We assume it got broken,” he replied with sadness in his tone. “If you look at Grandma Joan’s old inventory records, it was in her store up until at least the early 50s. However, when everything was brought over here after the store closed, it was gone. Dad said he never found a sales receipt, and there was no mention of a theft, so he just figured it had been broken.”

I slammed back another shot of liquor. I could feel the warm liquid begin to suppress my internal filters. “It’s not,” I said, imagining the music behind their waltz.

“It’s not what?” Blake asked with a squint in his eye.

“It’s not broken. I know where it is. I’ve been staring at that same couple since I was about four.”

This time, Blake and Darrell looked at each other without trying to hide it. Blake shot his glance back toward me as I slowly turned my gaze toward him. “Oh, do I have your full attention now?” I asked with a half-assed innocent look.

“Well, you have mine,” quipped Darrell as he stood from his seat. “Where is it?” His tone was a little above his pay grade.

The big man turned his head and returned to his seat. He looked back my way, and I could feel the heat of rage coming from him. For the first time since we’d met, I had a bad feeling about this one.

“Cherish, please, I’m so sorry. Darrell just gets a little protective when it comes to the collection.”

“Oh bullshit,” I sneered before taking another swig from the bottle. “I know you both think I’m some dumb little country girl who’s easy for the pickings, but let me assure you I’m not as dumb as I look.”

“Now Cherish, we don’t think you’re dumb.” Blake drawled in a sympathetic tone. He took a seat at the table and pulled out a chair for me.

I shot him a disgusted glare as I pushed the chair back under the table with my foot. “Okay, you might not think I’m dumb, but you sure as hell think I’m stupid. I’ve been watching the two of you shoot looks at each other all night.”

They both dropped their eyes, with Darrell getting a strange grin across his face.

“Oh, this is funny to you?” I barked. “Okay, Mr. Limo-driver-person, let me tell you what I know about you. You say that you’re Mr. Montgomery’s driver and/or bodyguard. However, I feel that you’re more than that. You’re his henchman. His go-to guy when he needs something found or removed.”

I took another deep swallow of the bourbon, all but finishing it off. I could feel the effects taking over my inhibitions, and that was never a good thing.

“Cherish, I think you need to sit down,” said Blake, reaching to pull out the chair again.

“And you,” I growled, pointing a tipsy index finger his way. “You bring me to New Orleans on the premise of getting to know my heritage and help me find out more about my story. We both know the real reason you wanted me out here. You want my grandmother’s money. If what you said is true, you can’t touch anything without my signature.”

Blake pulled out the chair and smiled. “Cherish, sit down, and we’ll explain everything.” There was something about his tone that said I might have been way off my game this time.

As I sat down, Darrell got up and left the room. He no longer carried the feel of hatred, but he was still pissed.

“Cherish,” Blake said in a hushed tone, “you’re right about the fact that Darrell is my go-to guy. He’s worked for me for almost 20 years now. And yes, he’s been known to take care of a few things I’ve needed swept under the rug, but he’s never killed anyone for me. However,” he continued, “you’re wrong about my wanting your money. If I’d have wanted access to your fortune, I’d have done it years ago. I’m an attorney, remember? I could have listed everything as unclaimed and posted myself as executor. I have had access to everything since I took over the law firm. No, I don’t want your money. I want you.”

I was sure the look on my face was priceless. I took the last sip from the bottle and slid it across the table. “Why?” I asked, looking him dead in his eye.

He smiled, taking a little sip from his glass. “I need your expertise. I’d like to see the archives set up in some semblance of order. As you may have noticed when we came in, there’s no rhyme or reason to any of it. Honestly, I have no idea what most of it is or where it came from. I just know that it was all stuff Grandma Joan refused to part with.”

“What about the statuette?” I asked, feeling more than a little embarrassed.

“I’m glad you asked.” I jumped at the sound of Darrell’s voice as he entered the room. He took his seat and slid a folder toward me.

“First of all, Miss McKenzy, I apologize for my earlier outburst. I hope you can forgive me. Second, this folder contains what we know about the Dancing with Death statuettes.”

I opened the folder to see an old black-and-white photograph of someone holding both statues in their hands. They looked identical except for the fact that they were mirror images of each other.

“As far as we know, that picture was taken sometime in the mid-to-late forties. According to the detailed records your great-great-grandmother kept, they were purchased shortly after the turn of the century from a family who lived around the Irish Channel. They claimed the statuettes had been in their family since the arrival of the casket girls, though we have no documentation on that.”

I looked over the photograph, running my hand across the glossy finish. “This picture was taken in 1947,” I said without looking away.

“What makes you say that?” Blake asked.

“The ring on this woman’s hand is my grandmother’s engagement ring. My mother has worn it on her right hand for as long as I can remember. My grandfather always said he’d given a year’s wage just to put that on her hand.”

I once again felt the heat of rage emitting from Darrell’s direction. I looked up to see his head down, his eyes closed, and his fists clenched. “Do we have a problem?” I asked in defiance.

Blake patted my hand. “Don’t mind him. He has some unresolved—”

“Yes, I do have a problem,” Darrell blurted out, interrupting Blake. “Miss McKenzy, I hold no ill will against you, but I think your grandfather was a murderer.”

The shock of his accusation sent my head spinning. “Excuse me? You didn’t even know my grandfather. What the hell gives you the right to accuse him of murder?” At that moment, my rage matched that of the man across from me.

“Miss McKenzy, have you ever heard the name Richard Portland?” It was a question that I not only didn’t see coming, but it also caused me to sober right up.

“Yes, I have. Why?” I didn’t want to give any more information than was needed.

Darrell cast a glance toward Blake, who dropped his eyes and nodded his head. “I’m sorry, miss, but your grandfather was the last person known to have seen Richard alive. He was even a suspect in Richard’s murder, but the police couldn’t find any evidence against him.”

“Whoa!” I exclaimed. “Richard Portland was murdered? What happened?”

Darrell looked puzzled. “I thought you said you’d heard of him?”

“I knew he died, but I didn’t know he was murdered.” I was beginning to get that odd feeling about my grandfather again.

“My apologies, ma’am. Yes, Richard’s body was found in the fall of 1947. The police report said that his throat had been slit, and some strange symbols had been carved into his chest. The newspapers said it looked like a Voodoo ritual, but the practitioners all said it was nothing they’d ever seen before.”

“Okay,” I replied, “so what does that have to do with my grandfather?”

Darrell continued, “A few of their shipmates claimed that Richard and Ian had been fighting over a girl named Lizzie. She was Richard’s girl, but Ian wanted her for himself. Less than two months after Richard’s murder, your grandparents announced their engagement.”

I sat in silence. Many of the things I’d read in my grandmother’s journals were beginning to make sense. Then another question hit me.

“So what does this all have to do with the statuettes?”

Darrell became somber and soft-spoken. “Apparently, the woman who sold them to your great-great-grandmother said they held the spirits of lost loves. Around the time the one went missing, someone broke into Richard’s tomb and took a tooth, a finger bone, and a toe bone.”

“What?” I felt the mood in the room grow dark. “Why would someone steal a couple of tiny bones and a tooth? That’s gross.”

“I don’t know. All I know is that your grandparents were in New Orleans when the tomb was broken into. It was right before Mardi Gras, 1953. I’m not saying they had anything to do with it, but it was the last time anyone in your family saw your grandmother.”

I was becoming overwhelmed with all this new information. I had a couple of my questions answered, but that only led to more. Something told me I wasn’t ready for all the answers.

“Okay, then answer me this,” I smirked, crossing my arms across my chest. “Why do you care? Why am I hearing all this from you instead of my dear cousin here?” I looked over at Blake, who couldn’t seem to look me in the eye.

“Because,” Darrell continued in his somber tone, “Richard Portland was my uncle.”