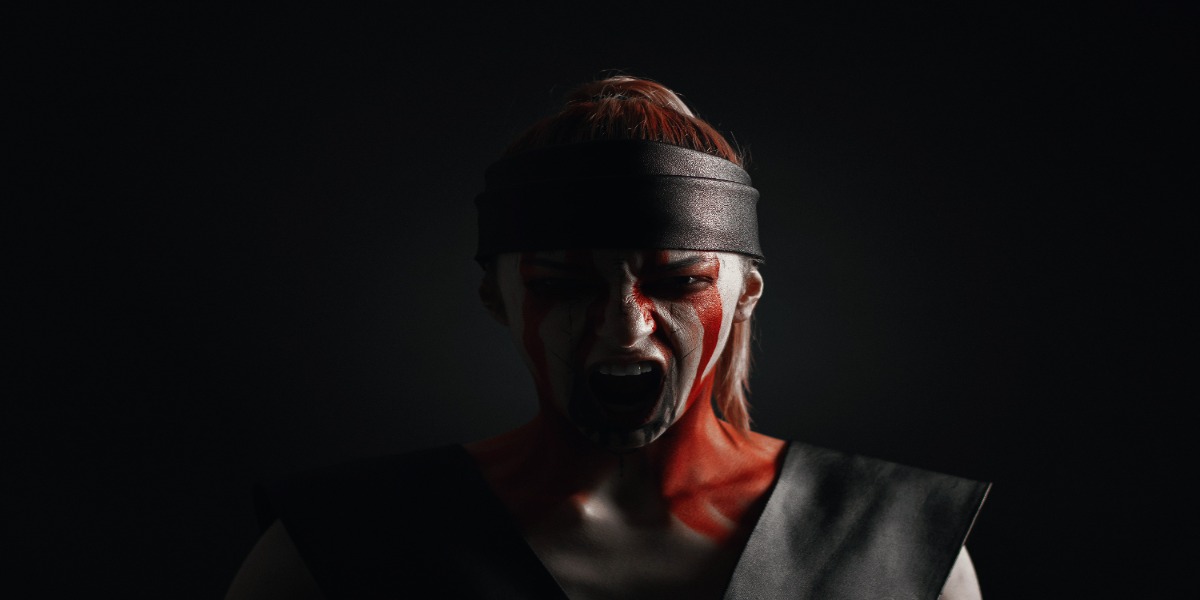 With my backpack slung over my shoulder, I cross the train tracks, glancing around to make sure I’m not being watched. Dead ahead is a tall chain-link gate topped with razor wire, and beyond that, an old abandoned naval base towers high above me. The gate appears to be locked tight with a thick chain, so I keep walking. Illuminated by the crescent moon, my gaze takes in the graffiti painted across the concrete structures. The chain-link perimeter gives way to rusted steel grating held up by concrete columns. I eye the columns as I secure my backpack. Backing up to give myself a head start, I run and jump, grabbing the lip of the column. I hoist myself up onto it and drop down on the other side with ease. Piece of cake.

I sprint across the pavement and dart into the nearest building, not liking being out in the open. I pull out one of my silver knives, keeping my wits about me as I venture deeper. The woman never told me where in the massive complex the fights were actually held. The area spans three, six-story buildings along the East Bank of the Mississippi River. I will have to rely on my heightened senses to find it. I sniff the air, picking up the freshest scent, and follow the trail. Clutching the hilt of my knife tighter, I silently pray that I’m not walking straight into a trap.

I blink, my night vision kicking in as my eyes adjust to the pitch black corridors. I don’t know how long I walk, as I follow the scent from building to building, venturing deeper and deeper. I jump, spinning around at the slightest noise, my senses on high alert. I switch my knife out for a gun as the scent leads me down into a basement. I’m well aware that I’m long past the point of no return at this stage. Cocking my gun and holding it up, I keep my back to the nearest wall.

On the opposite wall of the basement, light seeps from a door left ajar. Muffled shouting and the boom of speakers trickle out of the opening, and my nose twitches as the scent of fresh blood hits me. I lower my gun, reengaging the safety. I stuff it in the waist of my pants and hide my backpack behind some rusty, exposed pipes. I stop before the door, the sounds and smells clearer.

Well, here goes nothing, I think to myself, as I go down the winding stairs into the sub-basement. Tears prickle in my eyes, and I hold up a hand to block the glare of the fluorescent lights. The roar of the crowd encompasses me like a second skin. As my eyes adjust to the brightness, I take in the large space cram-packed with people. By their scents alone, I can make out numerous different types of supernatural beings. In the middle of the massive room is a large caged fight ring. Blood is smeared across the floor and is splattered across the chain-link, keeping the fighters in and the crowds out.

My gaze catches on the two fighters inside. A brute of a man pounds his opponent’s head into the concrete floor. My nostrils flare as the guy’s head is crushed like a watermelon, brain matter seeping out. I lick my lips and push my way through the crowd. I spin around as I feel someone grab my gun. “Hey, that’s mine!” I shout. My gaze slides up and up until I get a crick in my neck in order to meet the gaze of a man built like a freaking brick tower.

“Guns aren’t allowed in here,” he says, his voice like gravel. I note the layers upon layers of muscles underneath his skin-tight black shirt, and I almost feel intimidated. Almost.

I cross my arms over my chest. “I better get that back before I leave here.”

“Or what? What are you going to do to me, pipsqueak?” He laughs heartily. I scowl up at him, resisting the urge to punch him. He would squash you like a bug, Marrow. Chill.

“You must be new here,” he says, shaking his head and turning to leave.

“How do I enter one of the fights?” I call out to him, giving him pause. He turns back to face me, cocking a brow. He gives me a once over.

“Werehyena.” His eyes light with sudden interest at that.

“I can’t recall the last time that we had one of those,” he says, rubbing his stubble-covered chin. “Hell, why not? You’re in.”

I hardly hear the cage rattle closed behind us over the roar of the crowd and the overwhelming stench of blood. I take up a defensive stance, my gaze trained on my opponent. He has a solid build and is a good foot taller than me, which is really no surprise considering my short stature. He has a thick head of long brown hair and an unkempt beard. Tribal tattoos cover one side of his hairy chest, which seems almost fitting for what he is. Werebear. I haven’t had the pleasure, or displeasure, of fighting one, but I know enough about them that I’m certain I can hold my own.

We circle each other, tightening it with each step. He fakes a lunge toward me, testing my nerve, and my lip draws back in a silent snarl, my eyes predatory. He’s the first to make a move, swinging a punch at me. I dodge it far quicker than his lumbering form. Swing. Miss. Swing. Block. Swing. Repeat. I can see the annoyance in his countenance that he can’t keep up with me.

“Is that the best you can do? My grandma can punch better than that, and she’s been dead for nearly three decades,” I taunt him with a smirk. Something feral flashes in his eyes, and he lets out a primal roar, charging me. Oh shit! I quickly roll out of the way as he blasts past me like a train without brakes.

“Get back here, you little bitch!” he shouts as I dart back onto my feet, making a break for it. Shit, shit, shit! I can hear him gaining on me. “You can run, but you can’t hide!”

My eyes dart up to a low-hanging bar in the corner of the cage itself. I have an idea stupid enough it might just work. I can practically feel his breath down my neck as I scale the side of the fence to grab the bar. Using my momentum, my feet continue up the perpendicular side. I swing myself around to kick him hard in the side of the face. He slams into the fence. I land, tucking and rolling to lessen my impact with the ground.

The roar of the crowd is but white noise to my ears as my hyena surfaces. And for once, I don’t fight it. My body tears itself apart, expanding and reforming into a hulking hyena. Red eyes blazing, I spin around as he shifts into a massive bear. Without a second thought, I run at him full tilt.

We meet in the middle like the perfect storm, his claws raking down my side as I go for his jugular. I come away with a mouthful of fur before ducking under his next blow to take a chunk out of his side. A high-pitched giggle bubbles up from me as I dart just out of reach, again and again, watching with satisfaction as he begins to tire. Stamina is a hyena’s best friend.

I zip in one last time, my teeth sinking deep into his side. As he pulls away, I rip open his abdomen, his guts spilling out onto the floor. Even a were can’t heal from that.

I’m thrumming with adrenaline as I take a step back, licking the blood from my jowls.

I feel on top of the world as I take in the crowds cheering for me. I plod out of the ring with my head held high.

As I make my way back to where I stashed my backpack, a woman approaches me. “That was incredible! I knew there was something special about you.”

With her lean build, tanned skin, long brown hair, and sophisticated fashion, I recognize her almost instantly. She’s the one at the bar who had slipped me the note about this place.

I eye her for a moment and shift back to human form, my naked body bloody and bruised. “Thanks?”

I quirk a brow before making my way up the stairs and out of the sub-basement. I can hear the tap of her heels behind me. Pulling my backpack out of its hiding place, I turn to her. “Can I help you with something?” I ask.

A grin spreads across her perfect features. “That you can, in fact. You see, we just moved here, and the boss is looking for new recruits. I think you have what it takes.”

“Recruits? Does it involve beating people up because if that is the case then yes, the answer’s yes.”

She laughs, and I can’t help but chuckle along with her. “Something like that.”